The first period, at least up to 1974, was one of genuine program expansion, with discretionary improvement in coverage and benefit levels. Unemployment was fairly stable. But in 1975, in the aftermath of the first oil shock, unemployment rose dramatically, moderated slightly by 1979, and then rose again after the second oil shock. To understand why the marked increase in unemployment between 1975 and 1981 had a more limited impact on expenditure, it is necessary to describe the structure of unemployment compensation programs.

Basically, unemployment compensation programs are designed to help those with a previous record of employment who are expected to return to work within a relatively short time after becoming unemployed. Thus, the programs pay earnings-related benefits for a limited period of time.64 The payment period is usually a year or less, although in France and the Federal Republic of Germany it is longer for older workers. In some countries (e.g., Canada and the Federal Republic of Germany), the eligibility period varies with the length of previous employment. After eligibility for unemployment benefits runs out, only welfare benefits are available to the unemployed.

It has been noted that between 1975 and 1981 the increase in the level of unemployment was accompanied by an increase in average real benefits. In contrast to the previous period, this reflected not so much discretionary increases in benefit levels—indeed, concern about the supply-side impact of these programs actually led to discretionary reductions in benefit levels in some countries—but the successively higher levels of earnings on which benefits were based as unemployment began to affect individuals in increasingly better paid jobs.

It will be recalled that the economic scenarios described in Chapter II embody assumptions about future unemployment rates. These tend to be ad hoc assumptions, reflecting in the baseline scenario some retreat from the peak unemployment rates of 1983 to long-term rates close to those experienced immediately prior to the second oil shock, and reflecting in the pessimistic economic scenario not the peak 1983 rates but those experienced at the beginning of the recession66 These unemployment rates form the basis of the expenditure projections described below. As regards coverage, it is assumed that this is held at its 1980 level, while benefits increase with average productivity for GDP per capita in the case of the United Kingdom).

Chart 14 and Table 14 trace the development of the ratio of expenditure on unemployment compensation to GDP over the projection period, highlighting the effect of the range of assumptions about future unemployment, with, in the baseline scenario, France at the optimistic end of the range and Italy at the pessimistic end. In the Federal Republic of Germany, the results may also appear to be at the optimistic end, until account is taken of the marked fall in the size of the labor force. As the pessimistic economic scenario is characterized by higher unemployment rates than the baseline scenario, it thus shows higher expenditure ratios.

Although unemployment compensation programs are small and will probably remain so in expenditure terms, the policy issues with which they are associated are equally as important as those associated with the much larger programs in pensions, medical care, and education. Furthermore, they are of more immediate importance. It has been widely argued that supply-side rigidities, particularly in the labor market, have been holding back growth, especially in Europe. A range of such rigidities has been identified, including wage-fixing mechanisms, legislation governing the hiring and firing of labor, and unemployment compensation provisions.

As regards the last, the view has been formed that unemployment compensation programs designed to deal with the frictional and cyclical unemployment of the 1950s, 1960s, and early 1970s have proven inadequate under modern labor market conditions characterized by high levels of structural unemployment. These programs therefore need redesigning, with the emphasis being taken away from compensation of the short-term unemployed. Instead, these individuals might be integrated into a wider program of retraining and relocation better suited to their needs as well as those of the wider labor market.67

As pointed out, this ongoing debate may be of critical short-term importance, but it also has longterm significance. Anticipated demographic developments are going to affect the size and the sex and age composition of the work force. They will also affect the demand side, changing patterns of demand for goods and services that will feed through to the derived demand for labor. The outcome could be major labor market mismatches, resolvable only if the labor market is sufficiently flexible, thus requiring greater substitutability among different demographic groups. For example, women may have to move into traditionally male-dominated occupations; older workers may have to fill jobs that have previously been the preserve of the young. Unemployment compensation could be an integral part of a labor market adjustment mechanism that can help overcome the problems created by supply and demand mismatches.

In the seven major industrial countries, both direct expenditures and tax concessions are used to provide cash assistance to families with dependent children. The Federal Republic of Germany and the United Kingdom rely on direct expenditure in the form of family allowances. The United States provides only tax concessions (except in the case of welfare recipients). The other four countries offer a combination of both. In two countries for which information is readily available—Canada and France—tax expenditure has recently been a little less than half of direct expenditure (Owens (1983)). The heavy reliance on tax expenditure drives a larger wedge between direct and total effective expenditure in the case of family benefits than for any other social program (with the possible exception of housing). This being so, projections of social expenditure on family benefits are probably a poor guide to the total expenditure on cash assistance to families with dependent children.68

With the exception of France, the ratio of expenditure on family benefits to GDP is small. In France, family benefits are particularly generous for families with three or more children, the belief (partly supported by evidence) being that the marginal cost of raising children increases disproportionately with the third child and that without assistance this could be a limiting factor on family size. Thus, family benefits are in part a reflection of a strong pronatalist tendency. In other countries, family benefits principally fulfill an income maintenance objective, although they also serve the wider objectives of family policy. However, pronatalist objectives are typically not included among these. As a result, discussions of family benefits tend to focus on their effectiveness and efficiency in providing income support to families with children. In particular, the nature and extent of support provided to single parent families has been a growing concern as the numbers of such families have recently been increasing faster than ever before.

Chart 16 illustrates projected developments in expenditure on a composite group of smaller social programs (see also Table 14).70 It is assumed that benefits increase either with average productivity (France and the Federal Republic of Germany), GDP per capita (Italy, Japan, and the United Kingdom), prices (Canada), or prices plus 1 percent (United States).

It is difficult to discuss expenditure growth, its causes, and the associated policy issues for a composite of a disparate group of benefits like those included in the “other social expenditure” category. However, it should be noted that in no country is the ratio of expenditure to GDP devoted to these benefits, taken together, lower than the ratio of expenditure on unemployment compensation: and in Canada, the Federal Republic of Germany, and the United Kingdom, it is larger than the sum of the unemployment compensation and family benefit ratios. In the Federal Republic of Germany, it actually exceeds the education ratio. Thus, in expenditure terms, this group of benefits is far from trivial, although no individual program included in the group is likely to be of any significant size.

Government Expenditure on Unemployment Compensation as a Percentage of GDP, 1980–2025

Other Government Social Expenditure as a Percentage of GDP, 1980–2025 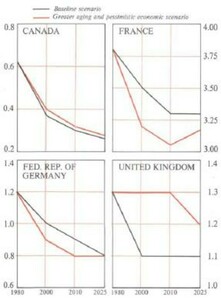