In the context of rising demand for food, water, and firewood, growing populations that lack the capabilities to minimize environmental impacts of production will be more susceptible to overexploiting and degrading their livelihoods. As a consequence of land use expansion and more intense use, global biodiversity loss will continue unabated or accelerate without additional policies.1 Largest losses are expected in Central and South America, South Asia, and Sub-Saharan Africa (map A2.1).

The importance of biodiversity for development is recognized by Millennium Development Goal 7, which includes targets to “reverse the loss of environmental resources” and “reduce biodiversity loss.” However, there is scant quantitative evidence on ways in which especially poorer people depend on biodiversity, although patterns can be distinguished. In general, it seems that poor people depend more on renewable natural resources than on biodiversity. However, the value of biodiversity aspects in terms of risk insurance, ecosystem resilience, and larger area ecosystem services (such as temperature regulation) still represents a large knowledge gap.2

Traditionally, policies to reduce biodiversity loss focus on area protection measures. However, these measures have no effect on the unprotected surrounding areas. Furthermore, expanding protected areas and reducing deforestation would impose limits on agricultural land expansion, pushing land and food prices upward. This would especially affect urban people who depend on the market for their food. Therefore, additional measures should include smarter and better-managed land use, alternative consumption patterns, and the development and application of technologies to increase production efficiency per hectare. Measured by food prices, these routes would provide relief for urban poor, increasing food security and affordability. However, rural poor people are oftentimes particularly vulnerable to changes in land values and uses. Potential increases in natural rents could affect rural poor for whom land entitlements are not adequately arranged, making them vulnerable for displacement by larger landholders with access to technology and markets.

In conclusion, policies to reduce biodiversity loss and enhance human development require a concerted approach. Some of these options are already being discussed at the international level; others appear to be more contentious (changing consumption patterns), requiring careful consideration at the national level, and will be dependent on voluntary approaches. This requires broadening the scope of biodiversity policies on all levels of decision making. Although most management decisions affecting biodiversity and ecosystem goods and services are made at a local level, these local decisions are conditioned by national and international policies beyond nature conservation. International policy domains, including agricultural and forestry sector policies, development assistance (including the role of international financial institutions) and international trade provide clear opportunities to integrate biodiversity and ecosystem goods and services in their policies in ways that can support poverty reduction as well as sustainable use and conservation of natural resources.3

The World Bank is committed to preserving endangered forests and natural resources. The Office of the Publisher has chosen to print Global Monitoring Report 2011: Improving the Odds of Achieving the MDGs on recycled paper with 30 percent post-consumer waste, in accordance with the recommended standards for paper usage set by the Green Press Initiative, a nonprofit program supporting publishers in using fiber that is not sourced from endangered forests. For more information, visit www.greenpressinitiative.org.

How many countries are on track to achieve the Millennium Development Goals (MDGs) by 2015? How many countries are off target, and how far are they from the goals? And what factors are essential for improving the odds that off-target countries can reach the goals? This year’s Global Monitoring Report 2011: Improving the Odds of Achieving the MDGs examines these questions. It takes a closer look at the diversity of country progress, presents the challenges that remain, and assesses the role of growth, policy reforms, trade, and donor policies in meeting the MDGs.

Yet challenges abound. Even the middle-income countries on track to achieve the MDGs are home to indigenous and socially excluded groups that are still very poor and often well behind in reaching the goals. Moreover, progress could stall without stronger global growth, expanded access to export markets for developing countries, and adequate assistance from donors.

This year’s report also presents findings and lessons from impact evaluations in health and education to better understand results on the ground. Such evaluations often show that the quantity of services devoted to health and education has increased—but not the quality. This may be one reason that progress toward those MDGs measured by outcomes (as in health) is slower than it is for those MDGs measured by access (as in education). Enhancing the efficiency, incentives, and accountability in service delivery is essential to improving outcomes.

Global Monitoring Report 2011 is prepared jointly by the World Bank and the International Monetary Fund. It reviews progress toward the MDGs and sets out priorities for policy responses, both for developing countries and for the international community.

Average change in species populations, relative to the intact situation (mean species abundance or MSA), 2000 and 2050 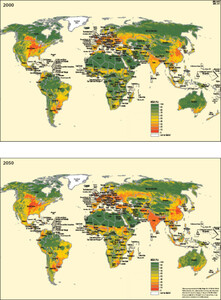