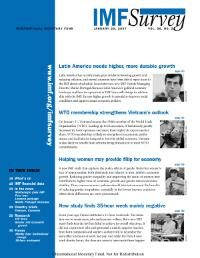 Vietnam became the 150th member of the World Trade Organization (WTO) on January 11, 2007. Before joining, Vietnam had made great strides toward integration with the global economy. Since 1993, the sum of exports and imports in relation to GDP has more than doubled, and its export market share has more than tripled. With exports becoming a leading engine of growth, GDP growth has averaged more than 7½ percent a year, and poverty has fallen sharply. Given this impressive performance, an obvious question is how the WTO will offer new opportunities and challenges for Vietnam’s future. 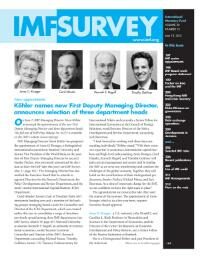 Beginning with a financial crisis in 1995/96, the Jamaican economy faced daunting challenges in the mid-1990s. The crisis resulted from the liberalization of the financial sector undertaken without a sufficiently robust prudential and supervisory framework in place—even across subsectors—against a background of a period of high inflation, high real interest rates, and macroeconomic stability. The ensuing bailout of the financial sector, through government guarantees of deposits—like insurance policies and pension funds—at failed institutions, has been very costly, estimated at more than 40 percent of GDP by end-2000/01. Contagion effects, however, were limited by a fairly large share of bank deposits held in foreignowned institutions unaffected by the crisis.

in FY2014 helped stabilize the global economy. The United States has adopted a budget and debt ceiling extension, and a strengthening economy has set the stage for normalization of monetary policy. These steps removed important uncertainties that were clouding the outlook in October 2013. In Europe, greatly reduced tail risks due to the implementation of policies at the national and regional levels and the return of growth in almost all countries led to substantial improvements in market confidence in both sovereigns and banks. In Japan, “Abenomics” was making a