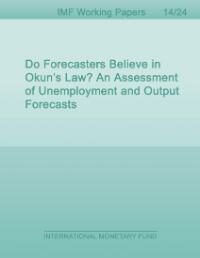 ’s semi-annual survey, from the one we use. They found that “predictions of unemployment and real growth move in opposite directions, as per Okun’s Law.” For the period 1999 to 2007, the Okun coefficient—the responsiveness of unemployment changes to GDP growth—is about -0.6 in the data and about -0.75 in the forecasts. The second paper is by Pierdzioch, Rülke and Stadtmann (2011) . They use the same data source as in this paper, roughly the same set of countries (the G7), and a sample period from 1989 to 2007. One difference between their work and ours is that

Do Forecasters Believe in Okun’s Law? An Assessment of Unemployment and Output Forecasts
Laurence M. Ball, João Tovar Jalles, and Mr. Prakash Loungani
This paper provides an assessment of the consistency of unemployment and output forecasts. We show that, consistent with Okun’s Law, forecasts of real GDP growth and the change in unemployment are negatively correlated. The Okun coefficient—the responsiveness of unemployment to growth—from forecasts is fairly similar to that in the data for various countries. Furthermore, revisions to unemployment forecasts are negatively correlated with revisions to real GDP forecasts. These results are based on forecasts taken from Consensus Economics for nine advanced countries since 1989. 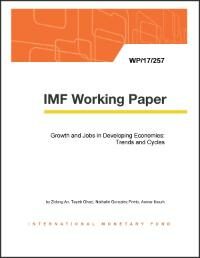 differences in the cases of Germany, Italy and New Zealand; in each case the Okun coefficient is considerably larger in absolute magnitude in the case of year-ahead forecasts. Nevertheless, correlation between the current-year and year-ahead estimated remains quite high; for example, the correlation between the estimates for h=6 and h=21 is 0.74. This supports our assertion in the main text that the Okun coefficient estimates from forecasts are not very sensitive to the choice of horizon. Table 3. Okun’s Law: Current Year Forecasts Current Year (h=6

Growth and Jobs in Developing Economies: Trends and Cycles
Zidong An, Tayeb Ghazi, Nathalie Gonzalez Prieto, and Mr. Aomar Ibourk
This paper investigates the relationship between economic growth and job creation in developing economies with a focus on low and lower middle-income countries along two dimensions: growth patterns and short-run correlations. Analysis on growth patterns shows that regime changes are quite common in both economic growth and employment growth, yet they are not synchronized with each other. Okun’s Law—the short-run relationship between output and labor market—holds in half of the countries in our sample and shows considerable cross-country heterogeneity.