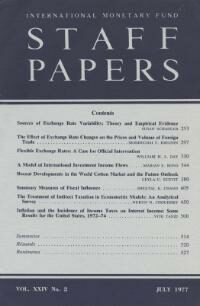 Recent Developments in the World Cotton Market and the Future Outlook
LEYLA U. ECEVIT

Cotton is still the most widely used textile fiber, accounting for more than one half of world fiber consumption after decades of severe competition from man-made substitutes.1 During recent years, remarkable changes have taken place in the world cotton market. Largely as a result of a deliberate change in government policy, in the late 1960s the United States began to maintain smaller carry-over stocks, and cotton prices became more sensitive to changes in output and demand. Consequently, international cotton prices,2 which were quite stable on both a month-to-month and a year-to-year basis during the 1960s (moving within the range of $0.27 to $0.33 a pound with an arithmetic average of $0.29 a pound), began an upward trend as early as 1971. During 1973, prices increased sharply and reached an all-time peak of $0.89 a pound in January 1974. Then the cycle was completed in January 1975 when prices fell to $0.47 a pound. The phase of slowly increasing prices that followed continued throughout 1975, and during December of that year prices averaged $0.59 a pound. Sharp increases occurred during the first seven months of 1976, and by July prices reached a new peak ($0.88 a pound). Cotton prices have stayed close to this peak since then (averaging $0.85 a pound in the second half of 1976 and $0.83 a pound in the first quarter of 1977) because of decreased availability. This occurred in spite of severe competition from the low-priced man-made substitutes.