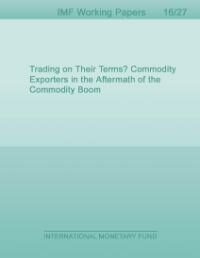 Trading on Their Terms? Commodity Exporters in the Aftermath of the Commodity Boom
Aqib Aslam, Samya Beidas-Strom, Mr. Rudolfs Bems, Oya Celasun, and Zsoka Koczan
Commodity prices have declined sharply over the past three years, and output growth has slowed considerably among countries that are net exporters of commodities. A critical question for policy makers in these economies is whether commodity windfalls influence potential output. Our analysis suggests that both actual and potential output move together with commodity terms of trade, but that actual output comoves twice as strongly as potential output. The weak commodity price outlook is estimated to subtract 1 to 2¼ percentage points from actual output growth annually on average during 2015-17. The forecast drag on potential output is about one-third of that for actual output.