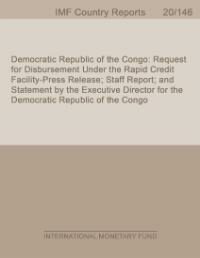 Democratic Republic of the Congo: Request for Disbursement Under the Rapid Credit Facility-Press Release; Staff Report; and Statement by the Executive Director for the Democratic Republic of the Congo
International Monetary Fund. African Dept.
This paper presents Democratic Republic of the Congo’s (DRC) Request for Disbursement Under the Rapid Credit Facility (RCF). DRC is experiencing a severe shock as a result of the Covid-19 pandemic. The short-term economic outlook has deteriorated quickly due to the fall of minerals’ prices and the impact of needed containment and mitigation measures. The IMF’s emergency financial support under the RCF is expected to address DRC’s urgent balance of payments needs while supporting this temporary fiscal loosening. Additional assistance from other development partners is expected to close the remaining external financing gap and ease budget financing needs. The authorities’ commitment to publish monthly audits of coronavirus disease 2019 related expenditures is welcome, to ensure transparency in the use of public funding. The implementation of the policies and structural reforms to which the authorities committed under the staff-monitored program agreed in December remains key to ensuring macroeconomic stability and restoring sustained inclusive growth. These include strengthening transparency and governance in the fiscal and mining sectors, boosting revenue mobilization, maintaining financial stability, and halting central bank financing of the deficit. 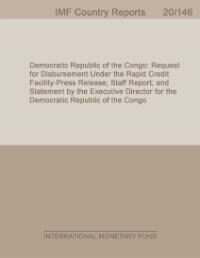 Democratic Republic of the Congo: Request for Disbursement Under the Rapid Credit Facility-Press Release; Staff Report; and Statement by the Executive Director for the Democratic Republic of the Congo
International Monetary Fund. African Dept.
The Democratic Republic of the Congo is suffering directly from the COVID-19 pandemic with 215 confirmed cases and 20 deaths as of April 9. The economic impact, chiefly through lower commodity prices, was being felt even before the first confirmed case was reported on March 10. The authorities’ policy response to the pandemic has been firm, scaling up health care spending and putting in place measures to help contain and mitigate the spread of the disease. The pandemic is also dampening domestic revenue mobilization and putting significant pressures on foreign exchange reserves. 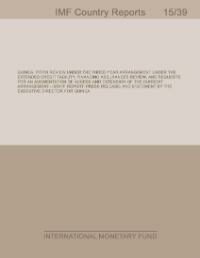 Guinea: Requests for Disbursement Under the Rapid Credit Facility and For Modification of Performance Criteria Under the Extended Credit Facility Arrangement
International Monetary Fund. African Dept.
EXECUTIVE SUMMARY Guinea is suffering from an outbreak of Ebola, which has become a humanitarian crisis with a significant economic impact. Preliminary estimates suggest a negative impact on 2014 growth, which will be markedly lower. Government revenue is showing a substantial shortfall and the response to the Ebola outbreak entails additional critical spending needs. The exchange rate has started to depreciate. The authorities intend to adopt a tighter monetary policy to address the transitory balance of payments shock. Performance under the ECF-supported program has remained satisfactory. Preliminary data indicate that all performance criteria (PCs) under the program for end-June 2014 were met. There has also been further progress with structural reform. The authorities have requested additional IMF financial assistance to meet urgent fiscal and balance of payments needs not anticipated at the time of the recent program review. Such assistance cannot be provided in the form of an augmentation of access under the ECF arrangement at this time since a review associated with the most recent availability date has not yet been completed because of delays in program implementation associated with the 2013 parliamentary elections. The authorities have requested a disbursement under the Rapid Credit Facility (RCF) because the urgent balance of payments need is characterized by a financing gap that, if not addressed, would result in an immediate and severe economic disruption. Moreover, Guinea’s balance of payments difficulties are caused primarily by a sudden exogenous shock and not by a withdrawal of financial support by donors, and its balance of payments need is expected to be resolved within one year with no major policy adjustments being necessary. As such polices remain guided by the objectives of the ECF-supported program. Staff supports the authorities’ request for a disbursement under the RCF of 25 percent of quota (SDR 26.775 million). It also supports the authorities’ request for a modification of the end-September indicative targets and end-December 2014 PCs under the ECF arrangement, including program adjustors.