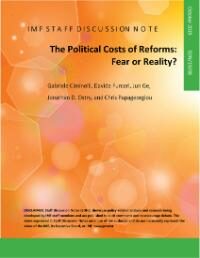 The Political Costs of Reforms: Fear or Reality?
Davide Furceri, Jun Ge, Mr. Jonathan David Ostry, Mr. Chris Papageorgiou, and Gabriele Ciminelli
Many countries are experiencing persistent, weak medium-term growth and limited fiscal space. Against this background, economic policy agendas—in both advanced and developing economies—are focusing increasingly on structural reforms. While there is broad agreement on the economic benefits of structural reforms, the political-economy of reform is less settled. This is because reforms may generate gains only in the longer term while distributional effects may be sizable in the short run, and because governments may lack political capital to confront vocal interest groups. In these circumstances, politicians may hold back on reforms, fearing they will be penalized at the ballot box. The aim of this Staff Discussion Note is to examine whether the fear of a political cost associated with structural reforms is justified by the available evidence, and whether there are lessons from the data about how reform strategies might be designed to mitigate potential political costs. It provides a major addition to recent IMF analysis examining the output and employment effect of reforms