Experience with multilateral debt restructurings with official creditors and with international banks in the second half of the 1970s was described in External Indebtedness of Developing Countries, issued in 1981.1 The present paper reviews recent developments, covering the period through early October 1983. It discusses the external debt problems that countries have experienced and the arrangements made for restructuring official and commercial bank debt. The paper does not deal with the broad economic conditions that are essential if debtor countries are to be successful in their adjustment efforts over the medium term. These conditions will include, inter alia, adequate flows of official and private capital on reasonable terms, economic policies in the industrial countries that will promote a noninflationary recovery and a resurgence of world trade, and greater access to markets for developing countries.

The sharp increase in the frequency and severity of external debt servicing difficulties has taken place against the background of a rapid rise in foreign borrowing by developing countries in recent years. Over the seven years from the end of 1974 through the end of 1981, i.e., prior to the emergence of widespread major debt servicing difficulties, the total external debt of non-oil developing countries increased at a compound annual rate of 20 percent (Table 1). In real terms—deflated by the unit value index for the exports of these countries, for example3—this debt increased at an annual rate of 10 percent. As a result the ratio of external debt to exports of goods and services rose from 1.0 to 1.2, and the ratio of external debt to gross national product (GNP) from 0.22 to 0.30.

The approach taken by most countries experiencing severe difficulties in servicing their external debt has been to request creditors to restructure debt service payments falling due or in arrears. Typically, the external debt accumulated by a country had been incurred against a relatively large number and a wide range of creditors, such as private suppliers, commercial banks, governments (either directly or indirectly, through export insurance schemes or other forms of official guarantee), and multilateral development institutions. As debt service problems experienced by countries generally did not relate to specific loans by individual creditors but were symptomatic of more general balance of payments problems, the requests for debt rescheduling were normally directed to most creditors having significant claims on the country.

The history of official multilateral debt renegotiations dates back to 1956 when a number of European countries met in Paris to reschedule Argentina’s foreign debt. Between 1975 and early October 1983 (the period reviewed in this section), there were 37 official multilateral debt reschedulings involving 19 debtor countries that are members of the Fund (Table 7). These countries were all non-oil developing countries, including 11 classified as low income. While basically all geographic areas were represented in the group, by far the largest group consisted of African countries. The amount of debt relief provided amounted to less than US$500 million for all countries, except Mexico, Romania, Sudan, Turkey, and Zaïre. 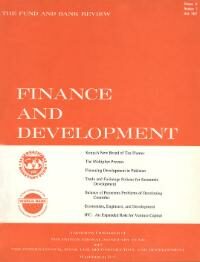 The Impact of Development Articles in Finance and Development generally deal with the world’s economic problems as they appear to the generals in the operations rooms, or to senior officers in the field. In this series of articles (the first of which was David Love’s “Pioneering in Japan” in Finance and Development, Vol. III, No. 4, December 1966) an attempt is made to give some glimpses of development as it affects the lives of the private soldiers of development.

Experience with multilateral debt restructurings with official creditors and with international banks in the second half of the 1970s was described in External Indebtedness of Developing Countries, issued in 1981. The present paper reviews recent developments, covering the period through early October 1983.

What foreign trade and exchange policies are most compatible with, or conducive to, economic development? This article describes the issues which have provoked some of the sharpest differences of opinion on economic policy in the postwar years.

As noted in Section II above, the balance of payments position of many developing countries has become increasingly difficult in recent years for a number of reasons and debt servicing difficulties have become widespread. As a result, there has been a sharp increase since 1980 in the number of countries that have approached commercial banks, either for formal debt restructuring in the form of refinancing or rescheduling or for other forms of relief arrangements, such as rollovers and informal extensions of maturing loans. This trend intensified late in 1982 and the first part of 1983, when in rapid succession some of the largest developing country borrowers in the international capital markets, including two major oil exporting countries, started negotiations with their creditor banks. As a result, the amount of member countries’ commercial bank debt that was restructured rose dramatically from an annual average of about US$1.5 billion during the period 1978 to 1981 to about US$5 billion in 1982 and to nearly US$60 billion by early October 1983 (Table 8).