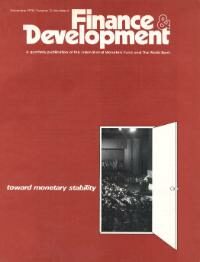 This paper reviews the 1975 Annual Meetings of the Boards of Governors of the IMF and the World Bank that were held in Washington, D.C., from September 1–5. The paper highlights that three separate but related themes dominated the discussion at the Annual Meetings. The first was the need to combat recession without aggravating inflation. The second was the immediate needs of developing countries in the present situation. And the third was the urgency of making further progress toward reform of the international monetary system.

The food price spikes have prevented millions of people from escaping extreme poverty. The record prices in 2008 kept or pushed 105 million people below the poverty line in the short run. They hit urban poor and female-headed households hardest. While food prices dropped sharply in 2009 with the financial crisis, they quickly rebounded and by early 2011 were almost back to 2008 levels. Sudden, unexpected increases in food prices impose particularly severe hardship on many households because they need time to adjust to higher prices. The large, initial impact on poverty of a rise in food prices tends to decline over time as production increases and the income of the poor in rural areas rises, but it is usually not large enough to offset the initial negative impact on poverty in the short run.

The global recovery shows signs of stalling amid deteriorating financial conditions. Global growth slowed to 3.9 percent in 2011 and is projected to decline further to 3.5 percent in 2012. The strongest slowdown is being felt in advanced economies, but the worsening external environment and some weakening in internal demand is expected to lead to lower growth in emerging and developing countries as well. This outlook is subject to downside risks, such as a much larger and more protracted bank deleveraging in the Euro Area or a hard landing among key emerging market countries. Against these broad developments, food, fuel, and other commodity prices have eased somewhat from their peaks in mid-2011; where high commodity prices had become a concern for broader price stability, this price decline has provided policy makers with greater flexibility to ease monetary policy.

Trade is an excellent buffer for domestic fluctuations in food supply. There is no global food shortage: the problem is regional or local—one of moving food, often across borders, from surplus production areas to deficit ones—coupled with affordability. World output of a given food commodity is far less variable than output in individual countries. Thus increased trade integration holds considerable potential to stabilize food prices, boost returns to farmers, and reduce the prices faced by consumers.

Official development assistance (ODA) has strengthened remarkably over the past decade, despite the disruptions of the global financial crisis centered in high-income countries. Net ODA reported to the Development Assistance Committee (DAC) of the Organisation for Economic Co-operation and Development (OECD) rose from 0.22 percent of donors’ gross national income (GNI) in 2000 to 0.32 percent in 2010 and reached a record high of $127.3 billion in 2010 (at 2009 prices), very close to the target set at the Group of Eight Gleneagles Summit in 2005. And among the 15 European Union (EU) member countries that committed to raising ODA to 0.51 percent of GNI by 2010, 8 countries reached the goal and another 4 countries made significant progress toward it. There is some evidence that international coordination, notably the commitments made at Gleneagles, contributed to the rise in aid disbursements (Kharas 2010). Nevertheless, aid remains well short of the goal of 0.7 percent of GNI set by the United Nations some 40 years ago and substantially below various estimates (Atisophon and others 2011) of annual disbursements required to meet the Millennium Development Goals (MDGs). Further, a key concern is that it may take several years before the full impact of the global financial crisis on aid flows becomes apparent. This is underscored by the just-released (April 2012) preliminary OECD data indicating that ODA disbursements declined by 2.7 percent in 2011 (at 2010 prices), as fiscal consolidation in several DAC countries has cut into their aid budgets. 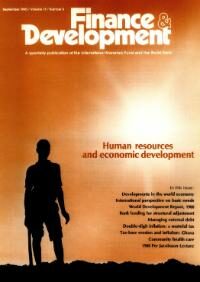 Finance & Development, September 1980
International Monetary Fund. External Relations Dept.
This paper highlights that despite severe limitations of resources, developing countries have made substantial progress during the past three decades in sending more children to school and in generally improving their education systems. Enrollment of children in schools at all levels has expanded at unprecedented rates. There has been a significant decline in the proportion of adults who are illiterate—from 44 percent in 1950 to 32 percent in 1975. Public expenditures for education have increased steadily in developing countries to reach roughly the same share of national product as in industrialized countries.

Goals and Targets from the Millennium Declaration
International Monetary Fund