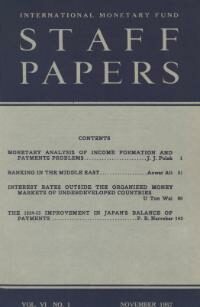 Modern banking in the Middle East dates from the second half of the last century. The Ottoman Bank in Turkey, established in 1863, is, perhaps, the oldest modern banking institution in the area. Banking has made slow but steady progress ever since, the progress depending upon the pace of economic development in various countries and of the transition from predominantly barter to semi-market economies. More recently, with the emphasis placed on economic development in a number of countries, there have been definite efforts to extend banking services and diversify banking institutions. However, the improvement has by no means been uniform. In some countries, for example, a nomadic way of life still survives, and there is no regularly organized banking system or paper currency. Thus, while progress in recent years has been steady, the banking structure of the Middle East still reflects, on the whole, the economic backwardness of the area and the limitations of domestic banking.