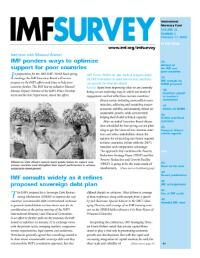 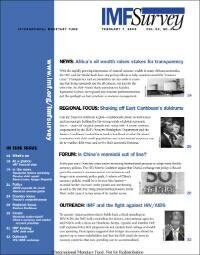 Over the past decade, the Polish economy has generally retained its external competitiveness, and, overall, exports have boomed. But movements in the real exchange rate have not made for a smooth path, and substantial structural changes have left the country with high and persistent unemployment. A recent IMF study took a closer look at Poland’s competitiveness and its implications for policymakers. 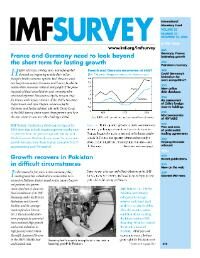 Grenada suffered a direct hit from Hurricane Ivan on September 7. A Category 3 hurricane with winds of nearly 200 km/hour, Ivan claimed several lives and left a trail of devastation estimated at twice the country’s annual income. Approximately 90 percent of the island’s houses were damaged or destroyed, and 30 percent of the population was rendered homeless. A wave of international support, including emergency assistance from the IMF, is helping the country recover. 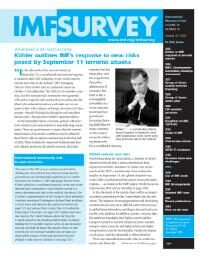 IMF Survey, Volume 30, Issue 20
International Monetary Fund. External Relations Dept.
“In the aftermath of the terrorist attacks of September 11, a coordinated international response is needed to deal with weaknesses in the world economy and the new risks in the outlook,” IMF Managing Director Horst Köhler said in a statement issued on October 5. He added that “the IMF, its 183 member countries, and the international community more generally will need to respond with sound policies to reduce the likelihood of a sustained slowdown and make sure we are ready to deal with a deeper and longer downturn if it does emerge—thereby limiting the disruption and attendant human costs.” Excerpts from Köhler’s statement follow.

Industrial countries have made very different fiscal policy choices over the past 30 years, which have been manifested in differences in their budget balances, size of government (ratio of total expenditure to GDP), and composition ofrevenue and expenditure. In a recent IMF Working Paper, Politics, Government Size, and Fiscal Adjustment in Industrial Countries, Anthony Annett explores whether political and institutional factors can shed light on these differences.

China’s economic reforms over the past two decades have brought tremendous economic transformation, rapid growth, and closer integration with the global economy. Real income per capita has increased fivefold, raising millions of Chinese out of poverty. Despite these achievements, difficult reforms—involving the state-owned enterprises and the financial sector—must still be completed, while social pressures from rising unemployment and income inequalities need to be addressed. China’s recent accession to the World Trade Organization (WTO) will not only bring further economic transformation but could also prove to be a watershed for the reform process. Wanda Tseng, Deputy Director of the IMF’s Asia and Pacific Department, talks with Gail Berre of the External Relations Department about China’s reforms, its successes, and future challenges.