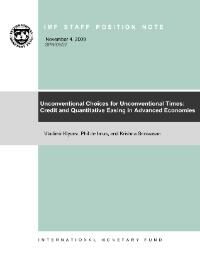 Unconventional Choices for Unconventional Times Credit and Quantitative Easing in Advanced Economies
Mr. Vladimir Klyuev, Phil De Imus, and Mr. Krishna Srinivasan
This paper examines the unconventional monetary policy actions undertaken by G-7 central banks and assesses their effectiveness in alleviating financial market pressures and facilitating credit flows to the real economy. Central banks acted nimbly, decisively, and creatively in their response to the deepening of the crisis. They embarked on a number of unconventional policies, some of which had been tried before, while others were new. The scale and scope of unconventional measures have differed substantially across major central banks. Massive asset purchases have boosted the size of the central bank balance sheets the most in the United States and the United Kingdom. However, the Bank of England has relied primarily on the purchases of government bonds, while the Fed has acquired a variety of assets, including commercial paper and mortgage-backed securities and providing financing for acquisition of other asset-backed securities. Central bank interventions, along with government actions, have been broadly successful in stabilizing financial conditions over time.