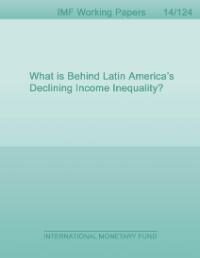 What is Behind Latin America’s Declining Income Inequality?
Ms. Evridiki Tsounta and Anayochukwu Osueke
Income inequality in Latin America has declined during the last decade, in contrast to the experience in many other emerging and developed regions. However, Latin America remains the most unequal region in the world. This study documents the declining trend in income inequality in Latin America and proposes various reasons behind this important development. Using a panel econometric analysis for a large group of emerging and developing countries, we find that the Kuznets curve holds. Notwithstanding the limitations in the dataset and of cross-country regression analysis more generally, our results suggest that almost two-thirds of the recent decline in income inequality in Latin America is explained by policies and strong GDP growth, with policies alone explaining more than half of this total decline. Higher education spending is the most important driver, followed by stronger foreign direct investment and higher tax revenues. Results suggest that policies and to some extent positive growth dynamics could play an important role in lowering inequality further.