Country experiences with monetary operations and government securities markets have been highly diverse, but a general pattern seems to have emerged since early 1992: most countries have moved toward more central bank operational autonomy and increased reliance on indirect instruments and on market-based interest rates. In addition, with few exceptions, reforms have led to a slow but sustained growth of the interbank and government securities markets. The sequencing of reforms has varied widely across countries, because of different political and macroeconomic conditions, and faster developments in one central banking area have not always been accompanied by similar progress in others (Table 2.1).

For the past six years, the central banks of the Baltics, Russia, and other countries of the former Soviet Union have undertaken ambitious programs of reform.1 The reforms have focused first on stabilizing monetary policy and then on achieving a market-based determination of interest and exchange rates. The reform of central bank operating procedures has been a key piece of the program. Central banks in the 15 countries have been encouraged to manage banking liquidity through market operations with indirect instruments. There have also been closely coordinated reforms to foster foreign exchange markets, interbank money markets, government securities markets, and to strengthen various central bank functions, including the payment system, central bank accounting and internal audit, and banking supervision and restructuring. This volume examines the progress the 15 countries have made in transforming their financial systems, and highlights the substantial progress achieved by central banks in most of the countries.

The following tables provide a summary of the reforms in the key central banking areas for the Baltics, Russia, and other countries of the former Soviet Union. The tables start with the implementation of monetary policy—specifically, the institutional context in which the central bank operates and its short- and medium-term operating targets, markets and interest rate management, and instruments and operating arrangements. They then move on to developments in the foreign exchange area and priorities for future reform. Significant attention is devoted to banking supervision and bank restructuring—first, the institutional framework of the banking system is covered; then, the structure and performance of the banking system is summarized; and, finally, bank restructuring measures in the individual countries are listed. The chapter concludes with summaries of payment systems and central bank accounting reforms.

The reform efforts outlined in the previous chapters must be supported by an appropriate legal framework; that is, one that enforces economic decisions made based on market principles.

As a group, the Baltics, Russia, and other countries of the former Soviet Union have achieved substantial progress in the areas of convertibility, foreign exchange market development, and central bank foreign exchange operations over the last six years. The institutional arrangement for an efficient market-based allocation of foreign exchange is in place in most countries; payments and transfers for current account transactions are free of restrictions, except in a limited number of countries; and several countries maintain a liberal system for capital account transactions, or interpret liberally the restrictions in place. Nominal exchange rates have begun to stabilize in most countries (Figure 3.1). The ratio of gross international reserves to imports also indicates that countries are moving to macroeconomic stabilization (Table 3.1). Foreign exchange markets are usually shallow, however, with banking unsoundness often an obstacle to market deepening.

In addition to facilitating exchanges of goods, services, and financial assets, effective payment systems play a major role in ensuring the soundness of financial systems by limiting the possibility of systemic crises, which could undermine confidence in financial institutions and markets. In the early 1990s, the 15 countries under review were beset with a number of payment system problems. Besides slowness of payment processing, there were, in particular, large interenterprise arrears, defaults, and fraud. A farther complication was the breakdown of the ruble area, which caused cash shortages in some countries and excess cash in others, depending on the timing of the introduction of national currencies. The final step in the breakup of the ruble zone occurred in June 1993 when Russia demonetized all pre-1993 ruble bank notes, expediting the departure of the zone’s last seven non-Russian members.

The perestroika policies of the Soviet Union during the late 1980s set the stage for the rapid rise in the number of banks in individual states, although the ratio of credit to GDP remained low (see Chapter 8, Table 8.7). Concurrently, lax licensing policies and implementation of licensing requirements allowed many unsuitable banks to remain in the system in the early 1990s. At the same time, significant macroeconomic imbalances created conditions that gave banks incentives to engage in high-risk activities, such as foreign currency speculation. Weak banking laws and enforcement mechanisms failed to contain speculation by banks and to enforce safe and sound banking practices. As macroeconomic stabilization took hold, inflation declined and exchange rates stabilized. Banking problems of a systemic nature began to appear in the majority of countries because profits from speculation plummeted. Resulting bank insolvencies, sometimes entailing significant losses to depositors, damaged public confidence. But the countries have undertaken efforts to develop systemwide policies that address these issues and to restore bank soundness and the public confidence necessary to mobilize savings more effectively.

The range of basic central bank accounting reforms adopted by the Baltics, Russia, and other countries of the former Soviet Union underscores the importance of reliable financial information in the effective conduct of market-based monetary and exchange market operations. With recent efforts by Azerbaijan, Kyrgyz Republic, and Ukraine, 11 central banks have introduced accounting systems that are broadly consistent with International Accounting Standards (IAS). Together with the information needed in a market economy, these systems promise to provide central bank managers with the financial information needed to inform policy deliberations as well as public financial statements. In nearly all of these cases, the reliability of the financial information produced by these new systems has also been subjected to varying degrees of independent assessment by internationally qualified external auditors. As part of the new accounting systems, the internal controls used by central banks to maintain the integrity of accounting information have been improved. Table 6.1 summarizes accounting reforms for each country during 1992-97.

In 1991, the Baltics, Russia and other countries of the former Soviet Union set out on the road to establishing market economies by lieberalizing prices, dismantling the instruments of central planning, and initiating a process of fundamental structural reforms. Since then these 15 countries have taken substantial steps toward achieving macroeconomic stabilization, and are well advanced in many areas of the transformation to market economies. In particular, considerable progress has been made in developing market-oriented financial structures. Edited by Malcolm Knight, Arne B. Petersen, and Robert T. Price, this volume focuses more narrowly on progress achieved in the area of market-oriented central bank and financial system reforms. 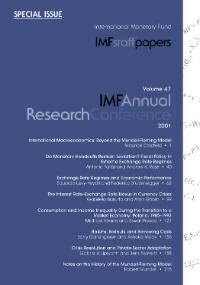 Efforts at crisis resolution that succeed in reducing potential inefficiencies and instability in the international financial system are in the interest of both the private and the public sectors. This paper focuses on how the private sector is likely to adapt to the recent initiatives by the official sector to further involve the private sector in the resolution of crises. The key conclusion is that recent experiences with payment suspensions and bond restructurings are limited as guides to determining the future success or failures of these initiatives, because the private sector most likely has adapted in order to minimize any unwanted involvement.