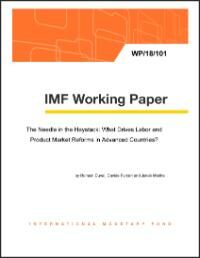 The Needle in the Haystack: What Drives Labor and Product Market Reforms in Advanced Countries?
Mr. Romain A Duval, Davide Furceri, and Jakob Miethe
The political economy literature has put forward a multitude of hypotheses regarding the drivers of structural reforms, but few, if any, empirically robust findings have emerged thus far. To make progress, we draw a parallel with model uncertainty in the growth literature and provide a new version of the Bayesian averaging of maximum likelihood estimates (BAMLE) technique tailored to binary logit models. Relying on a new database of major past labor and product market reforms in advanced countries, we test a large set of variables for robust correlation with reform in each area. We find widespread support for the crisis-induces-reform hypothesis. Outside pressure increases the likelihood of reform in certain areas: reforms are more likely when other countries also undertake them and when there is formal pressure to implement them. Other robust correlates are more specific to certain areas—for example, international pressure and political factors are most relevant for product market and job protection reforms, respectively.