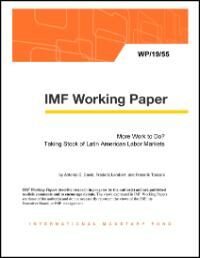 More Work to Do? Taking Stock of Latin American Labor Markets
Mr. Antonio David, Frederic Lambert, and Mr. Frederik G Toscani
We analyze the performance of labor markets in Latin America since the late 1990s. Strong GDP growth during the commodity boom period led to important gains in employment and a fall in the unemployment rate as labor demand outpaced an increasing labor supply. We emphasize the role of informality in the dynamics of labor markets in Latin America. A re-examination of Okun’s law shows that informality dampens changes in unemployment accompanying output fluctuations. Moreover, we present some evidence that countries with higher redundancy costs and cumbersome dismissal regulations, exhibit “excess” informality over and above what would be expected based on their income and educational levels. Labor market reforms could thus contribute to reducing informality and increasing the responsiveness of labor markets to output growth. However, looking at selected case studies of reforms using the synthetic control method, we find mixed results in terms of labor market outcomes. 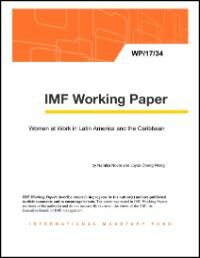 Women at Work in Latin America and the Caribbean
Natalija Novta and Joyce Wong
Women across the world remain an underutilized resource in the labor force. Participation in the labor force averages around 80 percent for men but only 50 percent for women – nearly half of women’s productive potential remains untapped compared to one-fifth for men. Latin America and the Caribbean (LAC), as a region, saw the largest gains in female labor force participation (LFP) in the world during the last two decades. Women in LAC are becoming increasingly active in paid work, closing the gap with men and catching up to their counterparts in advanced economies at an impressive rate. In this paper, we document the recent trends in female LFP and female education in the LAC region, discuss the size of potential gains to GDP from increasing female LFP and policies which could be deployed towards this goal.