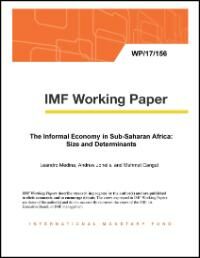 The Informal Economy in Sub-Saharan Africa: Size and Determinants
Leandro Medina, Mr. Andrew W Jonelis, and Mehmet Cangul
The multiple indicator-multiple cause (MIMIC) method is a well-established tool for measuring informal economic activity. However, it has been criticized because GDP is used both as a cause and indicator variable. To address this issue, this paper applies for the first time the light intensity approach (instead of GDP). It also uses the Predictive Mean Matching (PMM) method to estimate the size of the informal economy for Sub-Saharan African countries over 24 years. Results suggest that informal economy in Sub-Saharan Africa remains among the largest in the world, although this share has been very gradually declining. It also finds significant heterogeneity, with informality ranging from a low of 20 to 25 percent in Mauritius, South Africa and Namibia to a high of 50 to 65 percent in Benin, Tanzania and Nigeria.