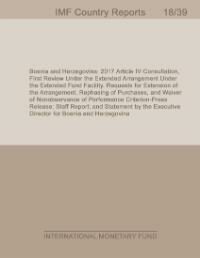 Bosnia and Herzegovina: 2017 Article IV Consultation, First Review Under the Extended Arrangement Under the Extended Fund Facility, Requests for Extension of the Arrangement, Rephasing of Purchases, and Waiver of Nonobservance of Performance Criterion-Press Release; Staff Report; and Statement by the Executive Director for Bosnia and Herzegovina
International Monetary Fund. European Dept.
This 2017 Article IV Consultation highlights the macroeconomic conditions in Bosnia and Herzegovina (BiH) have remained stable. BiH has made progress in reducing internal and external imbalances in recent years, thanks to a prudent fiscal position, and a strong monetary anchor provided by the currency board. However, job creation has been limited, unemployment has remained high, particularly among the youth, and the income convergence with the European Union has stalled. Fiscal stability has been maintained, mainly through continued restraint on current government spending. Progress in improving budget composition has been limited and reforms of state enterprises have not progressed as envisaged.