Fifth and Sixth Reviews Under the Stand-By Arrangement-Press Release; Staff Report; and Statement by the Executive Director for Honduras 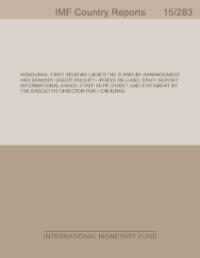 This paper discusses Honduras' First Reviews Under the Stand-by Arrangement (SBA) and Standby Credit Facility (SCF). Program implementation for the first reviews has been strong. All 2014 performance criteria and indicative targets were met, most with significant margins. The authorities have also created fiscal space within the program to increase social spending and support efforts to reduce poverty. On the structural side, December 2014 and March 2015 benchmarks were also generally observed. The revised program proposed for 2015 envisages further strengthening fiscal and net international reserves targets. The IMF staff supports the completion of the first reviews under the SBA and the SCF Arrangements. 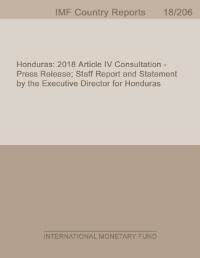 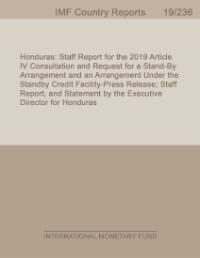 Honduras: Staff Report for the 2019 Article IV Consultation and Request for an Stand-by Arrangement and an Arrangement Under the Standby Credit Facility—Informational Annex
International Monetary Fund. Western Hemisphere Dept.

Staff Report for the 2019 Article IV Consultation and Request for a Stand-By Arrangement and an Arrangement Under the Standby Credit Facility-Press Release; Staff Report; and Statement by the Executive Director for Honduras 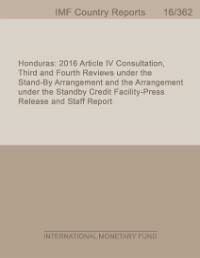 Honduras: 2016 Article IV Consultation, Third and Fourth Reviews under the Stand-By Arrangement and the Arrangement under the Standby Credit Facility-Press Release and Staff Report
International Monetary Fund. Western Hemisphere Dept.
This 2016 Article IV Consultation highlights that the real output of Honduras in 2015 grew at 3.6 percent, slightly higher than projected. From the demand side, growth was supported by the recovery in private consumption—which responded positively to a reduction in gasoline prices and strong remittances inflows—and a boost in investment. On the supply side, the recovery in manufacturing and agriculture supported greater activity. The outlook for 2016 remains favorable. Real GDP through the second quarter of 2016 grew by 4.1 percent (year over year) broadly consistent with IMF staff projection of 3.6 percent for 2016. This projected growth performance is supported by scaled up public infrastructure investment and a supportive monetary policy stance.