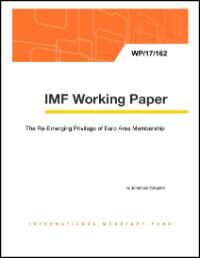 The Re-Emerging Privilege of Euro Area Membership
Mr. Johannes Wiegand
When the euro was introduced in 1998, one objective was to create an alternative global reserve currency that would grant benefits to euro area countries similar to the U.S. dollar’s “exorbitant privliege”: i.e., a boost to the perceived quality of euro denominated assets that would increase demand for such assets and reduce euro area members’ funding costs. This paper uses risk perceptions as revelaed in investor surveys to extract a measure of privilege asscociated with euro membership, and traces its evolution over time. It finds that in the 2000s, euro area assets benefited indeed from a significant perceptions premium. While this premium disappeared in the wake of the euro crisis, it has recently returned, although at a reduced size. The paper also produces time-varying estimates of the weights that investors place on macro-economic fundmentals in their assessments of country risk. It finds that the weights of public debt, the current account and real growth increased considerably during the euro crisis, and that these shifts have remained in place even after the immediate financial stress subsided.