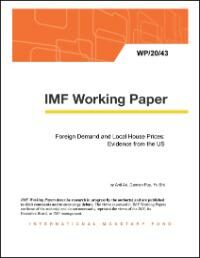 Foreign Demand and Local House Prices: Evidence from the US
Mr. Damien Puy, Mr. Anil Ari, and Ms. Yu Shi
We test whether foreign demand matters for local house prices in the US using an identification strategy based on the existence of “home bias abroad” in international real estate markets. Following an extreme political crisis event abroad, a proxy for a strong and exogenous shift in foreign demand, we show that house prices rise disproportionately more in neighbourhoods with a high concentration of population originating from the crisis country. This effect is strong, persistent, and robust to the exclusion of major cities. We also show that areas that were already expensive in the late 1990s have experienced the strongest foreign demand shocks and the biggest drop in affordability between 2000 and 2017. Our findings suggest a non-trivial causal effect of foreign demand shocks on local house prices over the last 20 years, especially in neighbourhoods that were already rather unaffordable for the median household.