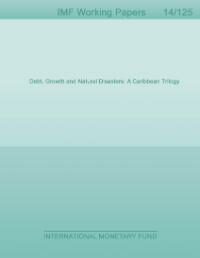 Debt, Growth and Natural Disasters A Caribbean Trilogy
Mr. Sebastian Acevedo Mejia
This paper seeks to determine the effects that natural disasters have on per capita GDP and on the debt to GDP ratio in the Caribbean. Two types of natural disasters are studied –storms and floods– given their prevalence in the region, while considering the effects of both moderate and severe disasters. I use a vector autoregressive model with exogenous natural disasters shocks, in a panel of 12 Caribbean countries over a period of 40 years. The results show that both storms and floods have a negative effect on growth, and that debt increases with floods but not with storms. However, in a subsample I find that storms significantly increase debt in the short and long run. I also find weak evidence that debt relief contributes to ease the negative effects of storms on debt.