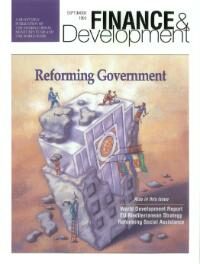 Cracks in the System: World Economy Under Stress" explores the rapidly changing institutional and policymaking landscape around a financial crisis that now threatens a deep and prolonged global recession. The lead article looks at how the world got into the mess and what to do about it, both now and over the medium term. Other articles review options for changing the rules of world finance, examine the case for modernizing the way countries coordinate their policies, and try to draw some lessons from past financial crises. The "other crisis" of high food and fuel prices is also assessed, as the effects extend past the mid-2008 price peak. "People in Economics" profiles Robert Shiller; "Picture This" illustrates how middle-income economies can reach high-income status; "Back to Basics" looks at all the components that make up gross national product; and "Country Focus" spotlights Saudi Arabia. 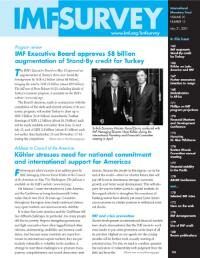 IMF Survey, Volume 30, Issue 10
International Monetary Fund. External Relations Dept.
The IMF’s Executive Board on May 15 approved an augmentation of Turkey’s three-year Stand-By Arrangement by SDR 6.4 billion (about $8 billion), bringing the total to SDR 15 billion (about $19 billion). The full text of Press Release 01/23, including details of Turkey’s economic program, is available on the IMF’s website (www.imf.org). 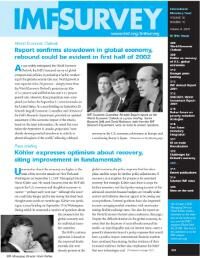 Briefing the press on September 24 in Washington, IMF First Deputy Managing Director Anne Krueger responded to questions about, among other topics, globalization and her view of the progress made in reforming the IMF since Managing Director Horst Köhler took office in May 2000. She also addressed specific questions about Brazil, Europe, Japan, Turkey, and the global economy. Like Köhler (see related article, page 309), she said that what happens to individual countries is largely a function of their own economic policies. She hoped countries would strengthen domestic policies and reforms but indicated that if, in spite of a country’s best efforts, there still appeared to be a need for IMF financing, the Fund stood ready to discuss policies and provide assistance. 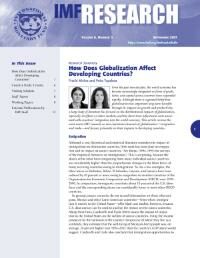 IMF research summary on how globalization affects developing countries (by Prachi Mishra and Petia Topalova); country study on Croatia (by Athanasios Vamvakidis); listing of visiting scholars at the IMF during June 2007-January 2008; listing of contents of Vol. 54, Issue No. 3 of IMF Staff Papers; listing of recent IMF Working Papers; and listing of recent external publications by IMF staff members.