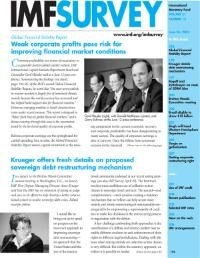 Interview with Daniel Yergin: Confidence in markets rose after the 1970s, but the pendulum may be swinging back
International Monetary Fund. External Relations Dept.

On June 4, at the invitation of the IMF’s External Relations Department, Pulitzer Prize–winning author Daniel Yergin came to the IMF for a discussion with staff of The Commanding Heights: The Battle for the World Economy. This six-hour series, which ran recently on U.S. public television, is based on a book of the same title, written by Yergin and Joseph Stanislaw. It tells the story of the battle of economic ideas, especially concerning the role of government in the marketplace, that was such an important part of the history of the twentieth century. Following the discussion, Yergin spoke to Prakash Loungani of the External Relations Department.