It is a great personal privilege to welcome to our country and to our capital city the Governors of the International Bank, the International Monetary Fund, and the International Finance Corporation. We are honored by the presence of such distinguished company in our midst. I think that in these days and times it would not be amiss for me to say that the welcome I assure you is not perfunctory. We are delighted you are here. We are more than pleased that you have again assembled to tackle problems through your daily meetings that are important to the whole world. So I assure you that the welcome, both officially and personally, is a very warm and sincere one. 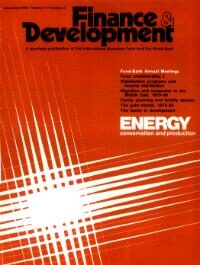 The changing gold market, 1978-80: A view of the volatile, mostly upward.movements in the real price of gold
Michael G. Martin

Why have the prices of gold been so volatile and risen so sharply above the levels of the early 1970s? The author comments on the factors affecting supply and demand that played a role in the dramatic turns of the market.

This book is about the changing character of monetary cooperation among nations since the end of the Second World War. This is a question of far more than a narrow technical interest. Money links countries. Its primary function is as an instrument of exchange. Money provides a way of translating ideas into practice and of allocating resources. The management of money is at a fundamental level concerned with the flow of information. By itself monetary exchange cannot produce new ideas and technologies—it is so to speak irrelevant to the heart of the mechanism that drives economic development—but it is a nerve center, distributing ideas about how those technologies may be used. When it fails to function properly, the course of development is impeded and the enrichment of mankind halted.

The end of the classic Bretton Woods system and the failure of the attempts to restore it were accompanied by very large current account imbalances in most countries. To a great extent the immediate cause of these lay in the oil price shock; and the immediate problem lay in the adjustment required by the increased cost of petroleum imports. As oil importing countries responded to their new deficits, they set off a major world recession. Or, to put the point in another way, the shock involved a massive transfer of resources to the oil producers, whose failure to spend their new wealth instantaneously slowed down the expansion of the global economy. More-over, the end of fixed parities removed a discipline and allowed almost all countries to pursue faster monetary expansion, with the result that the world money supply grew (Figure 10-1). Widespread floating thus immediately accelerated international inflation. This chapter examines the changes required in the international system as a result of the new transfer problem and the new need to redefine the practice of surveillance in an order no longer based fundamentally on a rule. The uncoupling of the international system was formally recognized in 1976 with the Jamaica agreement and in 1978, when the Second Amendment of the IMF’s Articles of Agreement came into effect.

Surveillance, the concept at the heart of the Second Amendment of the Articles of Agreement, offered a universal way of approaching world monetary management. This approach was not altogether new (it had been implicit in the mechanism created at Bretton Woods), but its importance had increased after the breakdown of the par value system. During the 1970s, it experienced two rather different types of challenge. First, there was a political reaction against what was fundamentally an institutional or technocratic approach to policy and to international cooperation. Second, the development of capital markets made increased resources available so that it appeared to some participants that the processes associated with surveillance (in particular adjustment) might be avoided. At the outset, no one could be quite certain if and how the recycling of oil surpluses could be managed, and what would be the implications for surveillance.

The simultaneous emergence of debt-servicing difficulties in a number of major borrowing countries, and a consequent threat to the solvency of many international banks, was the most traumatic international financial experience of the 1980s. The debt crisis also acted as a more general signal of misadjustments within the international system as a whole, as well as within individual national economies. It slowed or even halted growth in many developing countries. It brought home the consequences of the internationalization of finance: the vulnerability of producers in Latin America (and elsewhere) to interest changes decided by the Federal Reserve System in Washington and to alterations in sentiment in the banking community. But it also showed that bank depositors, bank customers, and, indeed, whole national economies in advanced industrial countries could be affected by policy shifts in Mexico City or Manila or Warsaw. For a time, a major banking crisis appeared imminent in industrial countries.

CHAPTER 13 Consensus in Cooperation and Its Fragility
Mr. Harold James

The history of international monetary relations in the 1980s involved an increasingly fruitful search for consensus, cooperation, and coordination. The first half of the decade was a period of great instability, of massive shocks, of disagreement about policy approaches, and—at the outset—of poor international coordination. In the face of divergent intellectual approaches, the IMF was at first condemned to near impotence in its dealings with large industrial countries. Many observers concluded that the international monetary system was in need of reform and in particular of institutional strengthening. At the first major monetary agreement of the 1980s, however, at the Plaza in 1985, the IMF was left on the sidelines.

CHAPTER 14 The Problems of the New Regionalism
Mr. Harold James

This chapter examines the extent to which regional attempts at monetary and trade cooperation or coordination have affected the behavior of the global economy and the functioning of surveillance. Often regional monetary arrangements were an attempt to preserve a greater element of rules in a world that had moved after 1973 away from rules, and was managing itself in a more informal way through persuasion.

In the course of the 1980s two related but separate debt crises exploded. Each raised major issues concerned with the operation and justice of the international financial system. For some time after the eruption of August 1982, most international attention was focused on the problems of private sector foreign lending, mostly to middle-income countries (see Chapter 12). But before 1982, as well as in the subsequent years, another and more long-term problem emerged concerning mostly official credits, and mostly to lower-income countries. The commercial debt crisis threatened the solvency of major international banks and thus the working of the global financial system. The official debt crisis posed a different menace, less a risk to world financial markets than a danger that a large number of countries would be practically excluded from the world economic order. In this sense, it constituted if anything an even more profound challenge to the idea of a world economy in which prosperity was “indivisible,” and to institutions committed to facilitating its operation. This chapter is concerned with that challenge, with the way in which changes in the design of international support programs have responded to a need, and also the extent to which they can help to achieve changes in policy in countries devastated by the consequences of bad policy.

The challenge posed to the world economic order by the collapse of centrally planned economies can only be understood in the light of the longer historical development of the relations between these systems of economic management and international financial institutions. Many commentators have asked whether any useful lessons could be learned in regard to the “transition” from the older history of socialist economic systems: was not the new liberal market order completely different to central planning? But in fact the past influenced crucial aspects of the transition. The difficulty of the transition may be explained not only in terms of expectations about security inherited from the socialist system but also by the unique extent of a collapse caused ultimately by profoundly misguided past policies.