The following remarks were made by the Acting Chair at the conclusion of the Executive Board’s discussion of the World Economic Outlook, Global Financial Stability Report, and Fiscal Monitor on September 14, 2012.

The global economy has deteriorated further since the release of the July 2012 WEO Update, and growth projections have been marked down (Table 1.1). Downside risks are now judged to be more elevated than in the April 2012 and September 2011 World Economic Outlook (WEO) reports. A key issue is whether the global economy is just hitting another bout of turbulence in what was always expected to be a slow and bumpy recovery or whether the current slowdown has a more lasting component. The answer depends on whether European and U.S. policymakers deal proactively with their major short-term economic challenges. The WEO forecast assumes that they do, and thus global activity is projected to reaccelerate in the course of 2012; if they do not, the forecast will likely be disappointed once again. For the medium term, important questions remain about how the global economy will operate in a world of high government debt and whether emerging market economies can maintain their strong expansion while shifting further from external to domestic sources of growth. The problem of high public debt existed before the Great Recession, because of population aging and growth in entitlement spending, but the crisis brought the need to address it forward from the long to the medium term.

Global growth slowed again during the second quarter of 2012 after rebounding during the first. The slowing has been observed in all regions. This synchronicity suggests an important role for common factors, many of which reflected wide-ranging spillovers from large country-specific or regional shocks. A first shock was the ratcheting up of financial stress in the euro area periphery in the second quarter. Second, domestic demand in many economies in Asia and Latin America (notably Brazil, China, and India, but also others) slowed, owing not just to weaker external demand from Europe but also to domestic factors. Growth also decelerated in the United States.

Chapter 3 The Good, the Bad, and the Ugly: 100 Years of Dealing with Public Debt Overhangs
International Monetary Fund. Research Dept.

Throughout the past century, numerous advanced economies have faced public debt burdens as high, or higher, than those prevailing today. They responded with a wide variety of policy approaches. We analyze these experiences to draw lessons for today and reach three main conclusions. First, successful debt reduction requires fiscal consolidation and a policy mix that supports growth. Key elements of this policy mix are measures that address structural weaknesses in the economy and supportive monetary policy. Second, fiscal consolidation must emphasize persistent, structural reforms to public finances over temporary or short-lived fiscal measures. In this respect, fiscal institutions can help lock in any gains. Third, reducing public debt takes time, especially in the context of a weak external environment.

Many emerging market and developing economies have done well over the past decade and through the global financial crisis. Will this last? This chapter documents the marked improvement in these economies’ resilience over the past 20 years. These economies did so well during the past decade that for the first time, emerging market and developing economies spent more time in expansion and had smaller downturns than advanced economies. Their improved performance is explained by both good policies and a lower incidence of external and domestic shocks: better policies account for about three-fifths of their improved performance, and less-frequent shocks account for the rest. However, should the external environment worsen, these economies will likely end up “recoupling” with advanced economies. Homegrown shocks could also pull down growth. These economies will need to rebuild their buffers to ensure that they are able to respond to potential shocks on the horizon. 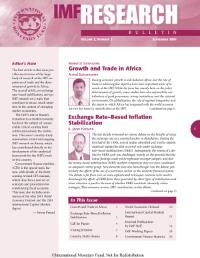 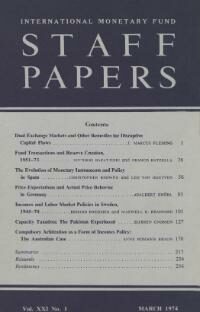 It has become a commonplace observation that one of the principal factors undermining the international monetary order that was set up at Bretton Woods has been the ever-growing magnitude of payments disequilibria caused by temporary and often reversible capital flows. Doubtless the regime of fixed though adjustable par values which was the centerpiece of the Bretton Woods system has been subjected to considerable stress by other factors also, notably the increasing importance of the cost-push element in inflation, with its differential impact on national competitive positions; but it is the extreme volatility of international capital flows, in response to interest differences or speculative incentives, that has compounded these difficulties to such a point that the feasibility of restoring the par value system itself can be called in question.

The European Monetary System in the Context of the integration of European Financial Markets
Occa Paper No.66
International Monetary Fund

This paper provides a survey of some issues concerning the evolution of the European Monetary System (EMS) in the context of increasingly integrated financial markets. It reviews the objectives of the EMS, its institutional structure, its perceived impact on key macroeconomic variables, and some criticisms of its current arrangements. It also describes the 1992 program to unify, inter alia, financial markets and then discusses the pressures that a more integrated financial marketplaces on country authorities and on financial firms. The prospective structural changes in European financial markets raise the issues of whether and how the EMS can continue to constitute a zone of monetary stability. Although the growing integration of financial markets is likely to increase the interdependence between monetary policies in the EMS countries, a nominal anchor could still be maintained by having the Bundesbank continue to lead the way on the course of monetary policy, or by formulating monetary policy on the basis of an index of traded goods prices, or through more far-ranging coordination of monetary policies. 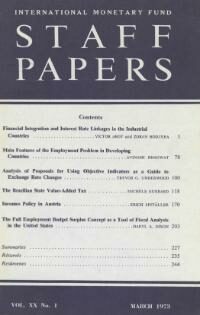 Beginning late in the 1950s a number of major developments had a bearing on money market integration in the industrial countries. On the one hand, controls over capital movements were liberalized in the second half of the 1950s. There is little doubt that this development increased the sensitivity of capital movements to differences in monetary conditions among these countries. During the 1960s, too, certain institutional developments—in particular, the rapid development of the Euro-dollar market and the growth of the multinational company—may have contributed further to the increase in the degree of money market integration. On the other hand, during the 1960s the monetary authorities of the industrial countries made various efforts to counteract the effects of increased capital mobility; they implemented various devices and controls to influence the movement of capital so as to give them increased leverage over their monetary policies. While there is little doubt that money markets are more highly integrated than in the years before convertibility, it is not at all clear that during the 1960s, on balance, the process of financial integration actually accelerated. This paper focuses on policy and theoretical issues posed by financial integration, but at the same time it explores measures of, and possible trends in, financial integration among the industrial countries.

In its surveillance activities, the Fund is frequently confronted with the difficult problem of how to identify exchange rate behavior that is unrelated to underlying economic and financial conditions and, consequently, should be viewed with concern from a national or international standpoint.1 This paper considers the various issues related to this problem as it pertains to industrial countries, both those that have independently floating exchange rates and those that operate under other exchange arrangements.2 The main issues are (1) the considerations that are important in determining whether an exchange rate deviates substantially from its sustainable level; (2) the degree of confidence that can be attached to judgments of the sustainable exchange rate; and (3) the relevant policy implications from the standpoint of Fund surveillance. These issues have been discussed extensively in the past, and it is not the purpose of this paper to introduce new concepts. Rather, the intention is to survey the techniques that are typically employed by the Fund staff and to provide an analysis of their practical usefulness.