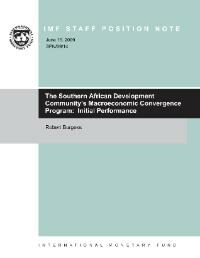 The Southern African Development Community's Macroeconomic Convergence Program: Initial Performance
Mr. Robert M Burgess
This paper discusses initial performance of the Southern African Development Community’s (SADC) Macroeconomic Convergence Program. The SADC’s regional economic integration agenda includes a macroeconomic convergence program, intended to achieve and maintain macroeconomic stability in the region, thereby contributing to faster economic growth and laying the basis for eventual monetary union. As macroeconomic performance in the SADC region has improved in recent years, most countries are making progress toward, and in many cases exceeding, the convergence criteria. Most SADC member states have recorded solid macroeconomic performance in recent years, in general coming close too, and in many cases surpassing, the convergence targets specified for 2008. A notable exception in this regard is Zimbabwe, which was in the grip of hyperinflation. The macroeconomic targets for later years are ambitious and, in some cases, warrant further evaluation, given that achieving the targets may be neither necessary nor enough to achieve good macroeconomic results.