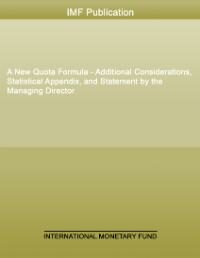 A New Quota Formula - Additional Considerations, Statistical Appendix, and Statement by the Managing Director
International Monetary Fund
An informal Executive Board seminar in December 2006 made an important start in the development of a new quota formula.2 The discussion was wide ranging, raising a number of important issues that need to be considered further in the development of a formula that can achieve the objectives of the quota reform and command the required broad support within the membership. This paper seeks to provide a basis for a second discussion, including by exploring issues raised at the December meeting. The paper also provides further simulations based on a wider range of assumptions regarding possible variables and their weights, as requested by many Directors. As with the last paper, it should be emphasized that this paper does not seek to propose any particular formula and that all the simulations presented should be seen as illustrative and as merely an aid to discussion. Nevertheless, it is hoped that the discussion of this paper will help lay the groundwork for beginning to narrow options and moving toward formulation of a specific proposal in the coming months. The paper does not address the size of the second round ad hoc quota increases. This question, which is closely linked to the magnitude of the increase in basic votes, will be taken up at a later stage once the discussion of the formula is more advanced.