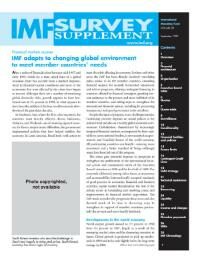 The rules governing access to the IMF’s general resources apply uniformly to all members. Access is determined primarily by a member’s balance of payments need, the strength of its adjustment policies, and its ability to repay the IMF. With the exception of access under the Supplemental Reserve Facility (SRF) and the Contingent Credit Lines (CCL), annual and cumulative access limits under other facilities and policies are set in proportion to members’ quotas. The Executive Board reviews the access limits annually in light of, among other considerations, the extent of members’ payments problems and developments in the IMF’s liquidity.

Over 90 percent of world trade is conducted on the basis of cash or short-term credit, with the remainder supported by medium- and long-term credit and other means of financing. Trade financing therefore is an important component of external financing for developing countries. Export credits supported by official export credit agencies (ECAs) are a key element of nonconcessional financing from bilateral sources to developing countries and economies in transition (Box 2.1).7 The Berne Union of ECAs accounted for more than 16 percent of the total indebtedness of these countries and almost half of their indebtedness to official creditors in 2001.8

Excessively high levels of external debt have been a serious obstacle to economic growth and poverty alleviation in heavily indebted poor countries. A high external debt-service burden can directly reduce resources available for social expenditures and adversely affect economic growth, hence indirectly leading to increases in poverty (Box 5.1). The HIPC Initiative, launched in 1996 and enhanced in 1999, aims to reduce heavily indebted poor countries’ external debt to sustainable levels, removing this obstacle to poverty reduction and growth in these countries.