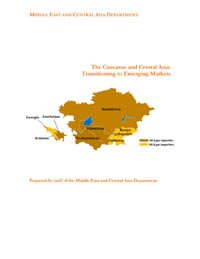 The Caucasus and Central Asia: Transitioning to Emerging Markets
International Monetary Fund. Middle East and Central Asia Dept.
The countries in the Caucasus and Central Asia (CCA) have recorded significant macroeconomic achievements since independence. These countries have grown more rapidly-—on average by 7 percent over 1996–2011—-than those in many other regions of the world and poverty has declined. Inflation has come down sharply from high rates in the 1990s and interest rates have fallen. Financial sectors have deepened somewhat, as evidenced by higher deposits and lending. Fiscal policies were broadly successful in building buffers prior to the global crisis and those buffers were used effectively by many CCA countries to support growth and protect the most vulnerable as the crisis washed across the region. CCA oil and gas exporters have achieved significant improvements in living standards with the use of their energy wealth.