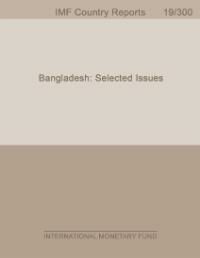 Bangladesh: Selected Issues
International Monetary Fund. Asia and Pacific Dept
This Selected Issues paper summarizes achievements of the authorities to date and describes several options to support their ongoing efforts. The economic impact of climate change on Bangladesh is likely to become more pronounced. The outlook for Bangladesh is a source of concern, with experts from the Intergovernmental Panel on Climate Change predicting that a rise in sea levels and coastal erosion could lead to a loss of 17 percent of land surface and 30 percent of food production by 2050. Responding effectively to the impact of climate change depends on designing an appropriate set of fiscal policies. These can play a key role in mobilizing both public and private sources of finance for mitigation and adaptation activities. A second priority for Bangladesh is to raise domestic revenue from its current low base, including through introduction of a carbon tax. By helping establish a predictable price for carbon emissions, carbon taxes also provide clear incentives to promote investments in emissions-saving technologies. Although opponents argue that such taxes harm economic activity and slow job creation, the revenue they generate may over time be used to reduce other distorting taxes on labor and capital.