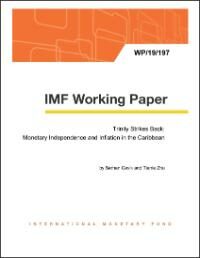 Trinity Strikes Back: Monetary Independence and Inflation in the Caribbean
Mr. Serhan Cevik and Tianle Zhu
Monetary independence is at the core of the macroeconomic policy trilemma stating that an independent monetary policy, a fixed exchange rate and free movement of capital cannot exist at the same time. This study examines the relationship between monetary autonomy and inflation dynamics in a panel of Caribbean countries over the period 1980–2017. The empirical results show that monetary independence is a significant factor in determining inflation, even after controlling for macroeconomic developments. In other words, greater monetary policy independence, measured as a country’s ability to conduct its own monetary policy for domestic purposes independent of external monetary influences, leads to lower consumer price inflation. This relationship—robust to alternative specifications and estimation methodologies—has clear policy implications, especially for countries that maintain pegged exchange rates relative to the U.S. dollar with a critical bearing on monetary autonomy.