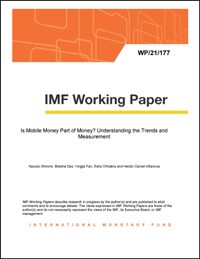 Is Mobile Money Part of Money? Understanding the Trends and Measurement
Ms. Kazuko Shirono, Esha Chhabra, Ms. Bidisha Das, Ms. Yingjie Fan, and Mr. Hector Carcel Villanova
The rapid uptake of mobile money in recent years has generated new data needs and growing interest in understanding its impact on broad money. This paper reviews mobile money trends using mobile money data from the Financial Access Survey (FAS) and examines the statistical treatment of mobile money under the IMF’s Monetary and Financial Statistics (MFS) framework. MFS guidance is straightforward in most cases, as many jurisdictions have adopted regulations which ensure that mobile money is captured in the banking system and thus in the calculation of broad money. However, in cases where mobile network operators (MNOs) act as niche financial intermediaries outside the banking regulatory perimeter and are allowed to invest their customer funds in sovereign securities and other permitted assets, mobile money liabilities may remain outside the banking system as well as monetary statistics. In that case, information on mobile money liabilities need to be collected directly from MNOs to account for mobile money as part of broad money. 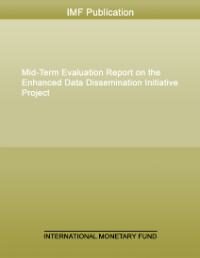 Mid-Term Evaluation Report on the Enhanced Data Dissemination Initiative Project
International Monetary Fund
This report presents the results of the mid-term evaluation of the Enhanced Data Dissemination Initiative (EDDI) financed by the United Kingdom’s Department for International Development (DFID) covering the period April 1, 2010 to September 30, 2012. The evaluation was conducted internally by the IMF in consultation with DFID. EDDI is a five-year project (April 2010–March 2015) implemented by the IMF to improve macroeconomic statistics in 25 African countries. The project includes modules for sub-groups of countries covering national accounts, monetary statistics, government finance statistics (GFS), balance of payments statistics (BOP), and harmonization of statistics in several regional organizations. The mid-point of a five-year project is an appropriate time for all stakeholders of the project to step back and take stock of what has been accomplished in the first half of the project, what has gone well, what aspects have been disappointing, and what might be adjusted or changed to make the remainder of the project more effective in achieving its objectives. To facilitate this process, questionnaires were developed to obtain feedback from three groups: counterparts in participating countries, IMF module managers and experts, and DFID country and regional advisors. Recommendations made by the stakeholders that will be followed up in the second half of the project are listed as bullets in italics below.