1 Reform and Growth
Mohamed A. El-Erian and Ms. Susan Fennell

Unprecedented opportunities have opened up for the countries of the Middle East and North Africa (MENA) region to transform their economies through accelerated economic growth. The opportunities are many and varied: prospects for continued rapid expansion of international trade; increasing globalization of world financial markets; closer economic links to the European Union; and an improved, although still very fragile, regional environment. The potential benefits to the region are enormous, but for the benefits to become reality the MENA countries themselves must ensure the necessary conditions.

How to achieve a better economic growth is the major economic policy challenge facing the countries of MENA. Sustained high growth is needed to improve living standards, reduce unemployment, and provide jobs for the growing labor force. During the 1970s and early 1980s, favorable developments in MENA’s external environment stimulated growth. This was no longer the case in the mid-to-late 1980s and early 1990s and the region’s per capita income stagnated and fell short of that achieved by developing countries as a group. Looking forward, the external environment is expected to remain broadly neutral with significant downside risk, particularly related to developments in the international oil market. Sustained economic growth will therefore depend primarily on domestic policy efforts.

Governments in the countries of the MENA region have traditionally played a dominant role in their economies, especially in terms of the resources that they command, their contribution to output, and their impact on economic incentives. While government involvement has been important in many respects, such as in developing infrastructure and providing public services, expenditure has not always been directed toward efficient and productive uses, and has often been out of line with the revenues available. As a result, until recently, the MENA region has been characterized by large fiscal imbalances.

Strong and dynamic modern financial institutions and systems are important prerequisites for MENA countries to compete in the global economy and achieve full integration into world financial markets. While most MENA countries have undertaken financial sector reforms over the past two decades and have made progress in financial deepening, financial sectors remain generally underdeveloped compared with the fast-growing developing countries. As a broad measure, M2 in MENA has remained on average around 60 percent of GDP, significantly lower than the high-performing Asian economies, but somewhat better than countries in Latin America and the Caribbean. Furthermore, the regional indicator is biased upward by the high level of financial deepening in the Mashreq (particularly in Israel, Jordan, and Lebanon; see Chart 1).1 Progress in financial sector reform now is more urgent than ever if the region is to reap the full benefit of reforms undertaken in other areas, raise significantly the levels of domestic saving and investment, and promote higher economic growth and employment creation.

The MENA region, with the exception of the GCC countries, remains one of the most protectionist in the world. Furthermore, despite the remarkable growth in international trade over the past few decades, MENA has become even less integrated in the world economy in terms of its trading activities. World trade grew by about 9 percent in 1994 and 1995—more than twice that of world output in those years—and is estimated to grow by some 6 percent annually over the next decade. This, together with the opportunities presented by the recent multilateral trade arrangements—the Uruguay Round and the European Union’s Mediterranean Basin Initiative—have opened up new growth opportunities for countries in the MENA region.

Africa and the International Monetary Fund
Papers Presented at a Symposium Held in Nairobi, Kenya, May 13-15, 1985

Edited by G.K. Helleiner, this volume contains the proceedings of a symposium jointly sponsored by the Association of African Central Banks and the IMF that was held in Nairobi, Kenya, in May 1985. 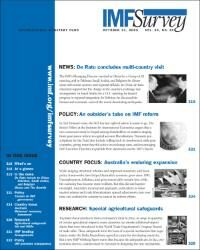 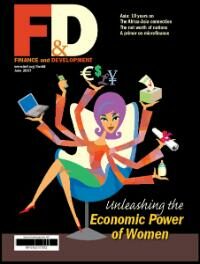 Back to Basics: Microfinance: Banking for the Poor
Ina Kota

The June 2007 issue of F&D spotlights gender equality. The lead article discusses progress toward fulfilling the Millennium Development Goal (MDG) on redressing gender discrimination and empowering women and related MDGs. The section also looks at how budgeting with gender issues in mind can help countries promote gender equality and what needs to be done to get girls from 'excluded' social groups into school. Other articles focus on Asia 10 years after the financial crisis, the implications of China's and India's growing ties with Africa, and making remittances work for Africa. 'Country Focus' looks at the challenges facing Bulgaria now that it has joined the European Union, 'Picture This' highlights the globalization of labor, and 'Back to Basics' gives a primer on microfinance. Two other pieces discuss the efficiency of public spending in Latin America and how countries can use the public sector balance sheet approach to diagnose vulnerabilities that are not immediately visible in the budget.