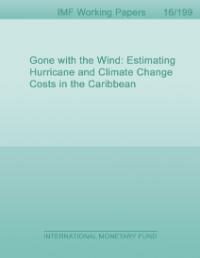 Gone with the Wind: Estimating Hurricane and Climate Change Costs in the Caribbean
Mr. Sebastian Acevedo Mejia
This paper studies the economic costs of hurricanes in the Caribbean by constructing a novel dataset that combines a detailed record of tropical cyclones’ characteristics with reported damages. I estimate the relation between hurricane wind speeds and damages in the Caribbean; finding that the elasticity of damages to GDP ratio with respect to maximum wind speeds is three in the case of landfalls. The data show that hurricane damages are considerably underreported, particularly in the 1950s and 1960s, with average damages potentially being three times as large as the reported average of 1.6 percent of GDP per year. I document and show that hurricanes that do not make landfall also have considerable negative impacts on the Caribbean economies. Finally, I estimate that the average annual hurricane damages in the Caribbean will increase between 22 and 77 percent by the year 2100, in a global warming scenario of high CO2 concentrations and high global temperatures.