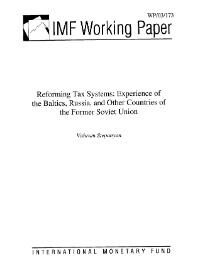 Reforming Tax Systems: Experience of the Baltics, Russia, and Other Countries of the Former Soviet Union
Vahram Stepanyan
Starting in the early 1990s, the Baltics, Russia, and other (BRO) countries of the former Soviet Union initiated tax reforms that varied widely at the later stages. Recently, some of the BRO countries, basing decisions on the proposition that lowering of the top marginal income tax rate would significantly benefit economic development and increase tax compliance, have initiated a new stage of tax reforms. This paper reviews country experiences and suggests that (i) overall, there seems to be little evidence of a substantial improvement in income tax revenues resulting simply from a reduction in the top marginal tax rates, and (ii) in the BRO countries, the elasticity of the behavior of economic agents, in terms of labor supply, saving, and investment, with respect to income tax rates is not large, and a reduction of the existing income tax rates is unlikely to lead to a notable expansion of economic activity.