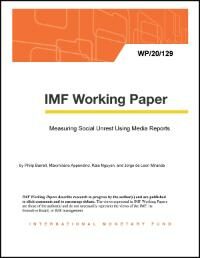 Measuring Social Unrest Using Media Reports
Mr. Philip Barrett, Maximiliano Appendino, Kate Nguyen, and Jorge de Leon Miranda
We present a new index of social unrest based on counts of relevant media reports. The index consists of individual monthly time series for 130 countries, available with almost no lag, and can be easily and transparently replicated. Spikes in the index identify major events, which correspond very closely to event timelines from external sources for four major regional waves of social unrest. We show that the cross-sectional distribution of the index can be simply and precisely characterized, and that social unrest is associated with a 3 percentage point increase in the frequency of social unrest domestically and a 1 percent increase in neighbors in the next six months. Despite this, social unrest is not a better predictor of future social unrest than the country average rate.