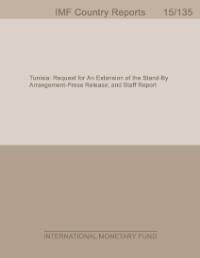 Tunisia: Request for An Extension of the Stand-By Arrangement—Press Release; and Staff Report
International Monetary Fund. Middle East and Central Asia Dept.
This paper discusses Tunisia’s Request for an Extension of the Stand-By Arrangement. The sixth review, originally scheduled to take place before end-March 2015, was delayed. Although quantitative performance criteria for end-December 2014 and end-March 2015 are likely to have been met, the structural reform agenda did not advance as expected, mainly reflecting the authorities’ focus on the formation of a coalition government and the approval of internal regulations for the newly elected parliament. The adoption of long-awaited legislation necessary to promote more inclusive growth and reduce vulnerabilities remains outstanding in many areas. The IMF staff supports the authorities’ request for an extension of the arrangement until December 31, 2015.