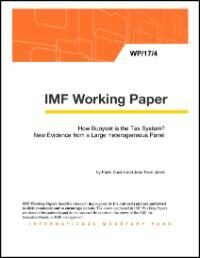 How Buoyant is the Tax System? New Evidence from a Large Heterogeneous Panel
Mr. Paolo Dudine and João Tovar Jalles
In this paper we provide short- and long-run tax buoyancy estimates for 107 countries (distributed between advanced, emerging and low-income) for the period 1980–2014. By means of Fully-Modified OLS and (Pooled) Mean Group estimators, we find that: i) for advanced economies both long-run and short-run buoyancies are not different from one; ii) long run tax buoyancy exceeds one in the case of CIT for advanced economies, PIT and SSC in emerging markets, and TGS for low income countries, iii) in advanced countries (emerging market economies) CIT (CIT and TGS) buoyancy is larger during contractions than during times of economic expansions; iv) both trade openness and human capital increase buoyancy while inflation and output volatility decrease it.