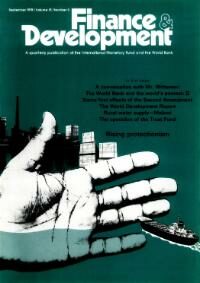 Finance & Development, September 1978
International Monetary Fund. External Relations Dept.
This paper discusses the appointment of Jacques de Larosière as Managing Director in the IMF. He assumed his duties at the IMF on June 17, 1978, succeeding Mr. H. Johannes Witteveen, of the Netherlands, whose service ended on June 16, 1978. Mr. de Larosière, 48, was Director of the French Treasury since 1974. He represented his government at many international conferences as well as on the boards of major industrial and financial concerns. Mr. de Larosière also participated in the work of the Committee of Twenty on International Monetary Reform and the Interim Committee.