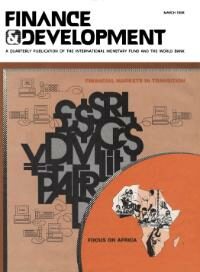 One of the more important yet puzzling aspects of the recent global stagflation has been the rather surprising resiliency of growth rates of real income in non-oil developing countries during the 1973-80 period in the face of the marked slowdown of corresponding growth rates in the industrial world. The primary purpose of this paper is to shed some light on this phenomenon by examining the relationship between the rate of economic growth in the non-oil developing countries and that in the industrial countries over the past decade or so. 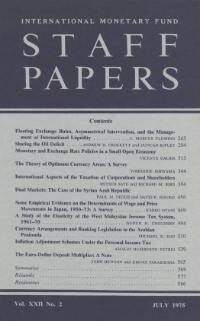 IMF Staff papers: Volume 22 No. 2
International Monetary Fund. Research Dept.
In this paper it is argued that in a system of widespread managed floating, as in a par value system with occasional floating, the problem of asymmetry of adjustment between the issuers of the principal intervention currencies and other countries and the problem of ensuring an effective international management of reserves remain to be solved. If the latter problem is less acute under a floating system, the former problem is potentially more acute than under par values. Although widespread floating would appear to offer no obstacle to the operation of a substitution account, its effect on the acceptability of asset settlement is debatable and it would add considerably to the difficulties of organizing multicurrency intervention. If politically acceptable, a system of guided intervention oriented to an established system of normal exchange rate zones would probably be superior to any other arrangement under floating for the purpose of promoting symmetry in adjustment, while permitting an adequate degree of exchange rate management and avoiding the anomaly of mutually offsetting intervention.

This paper has examined the relationship between the rate of economic growth in the non-oil developing countries and that in industrial countries, with the intention of appraising the effects of slower industrial country growth on the non-oil developing countries during 1973—80. At the risk of oversimplifying the arguments and the evidence examined in the preceding sections, the principal conclusions emerging from our analysis can be summarized as follows: