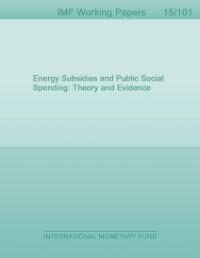 Energy Subsidies and Public Social Spending: Theory and Evidence
Mr. Christian H Ebeke and Mr. Constant A Lonkeng Ngouana
This paper shows that high energy subsidies and low public social spending can emerge as an equilibrium outcome of a political game between the elite and the middle-class when the provision of public goods is subject to bottlenecks, reflecting weak domestic institutions. We test this and other predictions of our model using a large cross-section of emerging markets and low-income countries. The main empirical challenge is that subsidies and social spending could be jointly determined (e.g., at the time of the budget), leading to a simultaneity bias in OLS estimates. To address this concern, we adopt an identification strategy whereby subsidies in a given country are instrumented by the level of subsidies in neighboring countries. Our Instrumental Variable (IV) estimations suggest that public expenditures in education and health were on average lower by 0.6 percentage point of GDP in countries where energy subsidies were 1 percentage point of GDP higher. Moreover, we find that the crowding-out was stronger in the presence of weak domestic institutions, narrow fiscal space, and among the net oil importers.