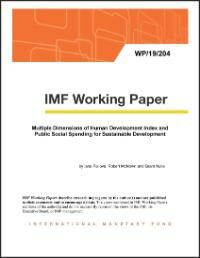 Multiple Dimensions of Human Development Index and Public Social Spending for Sustainable Development
Iana Paliova, Robert McNown, and Grant Nülle
Multidimensional assessment of human development is increasingly recognized as playing an important role in assessing well-being. The focus of analysis is on the indicators measuring the three dimensions of Human Development Index (HDI) — standard of living, education and health, and their relationship with public social spending for achieving the 2030 Agenda for Sustainable Development. The study estimates the effects of public social spending on gross national income (GNI) per capita (in PPP in $), expected years of schooling and life expectancy for a sample of 68 countries. The relationship is robust to controlling for a variety of factors and the estimated magnitudes suggest a positive long-run effect of public educational spending on GNI per capita, public educational spending on expected years of schooling, and public health expenditures on life expectancy.