This chapter evaluates whether a monetary union makes economic sense and discusses the institutional requirements for a successful Monetary Union in West Africa (ECOWAS). The chapter considers how best the political momentum for a union can be channeled toward a fundamental improvement in underlying policies. The paper also reviews the economic situation of the ECOWAS members, with the objective of evaluating the ease with which they can proceed to a common currency. Regional integration resulting in greater trade among ECOWAS countries may help increase efficiency of production. Trade among developing countries, in general, is likely to have fewer efficiency benefits than trade with developed countries, however, because the possibilities of exploiting complementarities are less. The foregoing considerations suggest that the momentum in favor of monetary union should be channelled into the crucial first phase of enhanced mutual surveillance and emphasis on each country improving its macroeconomic and structural policies. Success in this endeavor would in and of itself help to increase exchange rate stability. 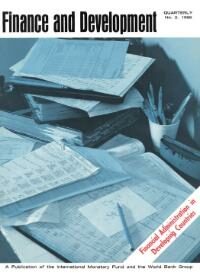 Moves toward the economic integration of neighboring countries are being made in many regions of the world. Various advantages are urged by those involved in such moves; this article discusses one of these.

On April 20, 2000, in Accra, Ghana, the leaders of six West African countries1 declared their intention to proceed to monetary union among the non-CFA2 franc countries of the region by January 2003, as a first step toward a wider monetary union including all the ECOWAS3 countries in 2004. The six countries committed themselves to reducing central bank financing of budget deficits to 10 percent of the previous year’s government revenue; reducing budget deficits to 4 percent of GDP by 2003; creating a Convergence Council to help coordinate macroeconomic policies; and setting up a common central bank. Their declaration states that, “Member States recognize the need for strong political commitment and undertake to pursue all such national policies as would facilitate the regional monetary integration process.”

Recent plans for monetary union come as a response to a political commitment by ECOWAS heads of state, who met on December 9–10, 1999, in Lomé, Togo, to accelerate the pace of regional integration.7 In particular, the Accra Declaration on a Second Monetary Zone, signed on April 20, 2000, by six non-WAEMU West African countries, expressed their intention to establish a second common currency in the region by 2003 and to work toward a single currency for ECOWAS by 2004. National ministers of finance, trade and commerce, foreign affairs, and integration, together with national central bank governors, sit on an ECOWAS Convergence Council, empowered to oversee implementation of the process. A Technical Committee is tasked with working out the structure and regulatory framework for a regional central bank, and other preparatory activities. The Council recently approved the Technical Committee’s recommendation to establish the West African Monetary Institute in early 2001 to serve as a transitional institution to a future, common central bank.

By virtue of their membership in the CFA zone, the ECOWAS countries that are part of WAEMU have followed a very different path from the non-WAEMU countries. After a brief overview of macroeconomic performance of the WAEMU group, this section will consider the following issues. Could a West African monetary union potentially serve as a vehicle for broader regional integration and could it promote improved domestic policies by locking in mutually agreed policy commitments through peer pressure? How well has WAEMU done in this regard? Next, to understand what the non-WAEMU countries could potentially gain or lose from giving up large areas of policy flexibility by forming a monetary union, it is useful to review how well they have used that policy flexibility. What has been the history of policy regime choices, particularly exchange rate and trade policy, in each of the non-WAEMU countries, and how have these choices affected macroeconomic performance?

IV What Is a Monetary Union?
Ms. Catherine A Pattillo and Mr. Paul R Masson

A monetary union is a zone where a single monetary policy prevails and inside which a single currency, or currencies which are perfect substitutes, circulate freely. Most countries issue their own currencies that are not linked to others and thus constitute monetary unions on their own. However, this chapter examines only the cases of monetary unions that extend across national borders to a group of sovereign countries. Lessons are drawn from their experience in the next chapter.

Existing currency unions can shed some light on the requirements for making a monetary union function smoothly and hence on desirable features of a possible currency union in West Africa. In this regard, it is also useful to survey the experience of other currency unions that have not survived.

VI The Benefits and Costs of a Common Currency for West Africa
Ms. Catherine A Pattillo and Mr. Paul R Masson

There is an extensive literature concerning the advisability for a given country of joining a monetary union.18 There are two general issues that should influence the choice. A first issue is whether the economic structures of candidates to join a monetary union are similar enough or flexible enough to support a fixed exchange rate between their currencies. A second issue is whether the institutions created to carry out the common monetary policy are likely to lead to improved policies. It is important to distinguish these two issues because a monetary union goes beyond simply fixing exchange rates between member countries. It is also important to distinguish between monetary union among a set of countries, thus tying their currencies together, and the external exchange rate policy of the union (e.g., whether to peg to the U.S. dollar or the euro).

In April 2000, the leaders of the six non-WAEMU ECOWAS countries agreed to form a “second monetary union” by 2003, which would then be merged with WAEMU in 2004. Preparations are under way to monitor the economic convergence of these countries in areas that are deemed important for monetary union. Each of the six non-WAEMU countries has agreed to set up a macroeconomic coordinating committee to speed the process.23

Plans for monetary union among ECOWAS countries are driven by a strong desire to increase regional economic linkages and political solidarity. Since many countries in the region are small both in terms of population and GDP, regional integration is seen as a way of increasing economic clout and bargaining power on the global scene. Larger markets may allow economies of scale and gains from trade to be exploited and increase production efficiency. Monetary union may provide a visible symbol of the commitment to regional integration—over and above its purely economic benefits that derive from greater economic efficiency and lower transactions costs.