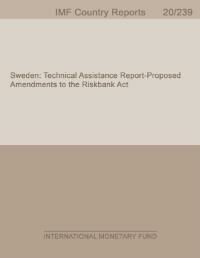 Sweden: Technical Assistance Report-Proposed Amendments to the Riksbank Act
International Monetary Fund. Monetary and Capital Markets Department
At the request of the central bank of Sweden (the Riksbank), the Monetary and Capital Markets Department (MCM) provided technical assistance (TA) on central bank operations by means of a desk review of the proposed amendments suggested by the independent committee to the Swedish Riksbank Act, during the period February 2019 and June 2020. The desk review was led by Mr. Ashraf Khan, and conducted jointly with Mr. Asad Qureshi, Mr. Romain Veyrune, and Mr. Rudy Wytenburg. Additional input was also provided by Ms. Ioana Luca of the IMF’s Legal Department and colleagues from the IMF’s European Department, Sweden Team. The purpose of the desk review was to provide advice to the Riksbank on key issues relating to central bank operations, with a particular focus on the central bank’s governance, independence, instruments, and internal organization. It should be noted that the review findings, comments, and recommendations in this report are not representative of views of the IMF or of its Executive Board and are intended for the purpose of contributing to the public discussion in Sweden in the context of the draft Riksbank Act. The comments are also not intended to be complete, nor represent a detailed legal review of the Act. Instead, as noted above, the comments reflect selected key issues from a central bank operations’ perspective. 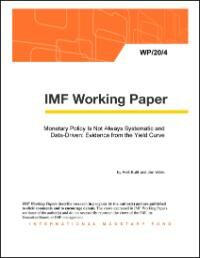 Monetary Policy Is Not Always Systematic and Data-Driven: Evidence from the Yield Curve
Mr. Ales Bulir and Mr. Jan Vlcek
Does monetary policy react systematically to macroeconomic innovations? In a sample of 16 countries – operating under various monetary regimes – we find that monetary policy decisions, as expressed in yield curve movements, do react to macroeconomic innovations and these reactions reflect the monetary policy regime. While we find evidence of the primacy of the price stability objective in the inflation targeting countries, links to inflation and the output gap are generally weaker and less systematic in money-targeting and multiple-objective countries.

Economic activity continued to expand in the first half of 2018, albeit at a slower-than-expected pace, mainly in advanced Europe. Domestic demand, supported by stronger employment and wages, remains the main engine of growth. However, the external environment has become less supportive and is expected to soften further in 2019 owing to slowing global demand, trade tensions, and higher energy prices. Tighter financial conditions in vulnerable emerging market economies and maturing business cycles are also weighing on activity. Accordingly, growth is projected to moderate from 2.8 percent in 2017 to 2.3 percent in 2018 and 1.9 percent in 2019. That said, it is expected to remain above potential in most countries in the region. 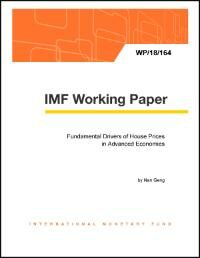 Fundamental Drivers of House Prices in Advanced Economies
Ms. Nan Geng
House prices in many advanced economies have risen substantially in recent decades. But experience indicates that housing prices can diverge from their long-run equilibrium or sustainable levels, potentially followed by adjustments that impact macroeconomic and financial stability. Therefore there is a need to monitor house prices and assess whether they are sustainable. This paper focuses on fundamentals expected to drive long run trends in house prices, including institutional and structural factors. The scale of potential valuation gaps is gauged on the basis of a cross-country panel analysis of house prices in 20 OECD countries. 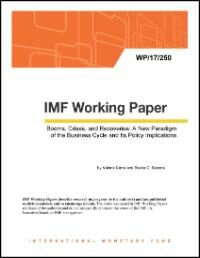 Booms, Crises, and Recoveries: A New Paradigm of the Business Cycle and its Policy Implications
Ms. Valerie Cerra and Ms. Sweta Chaman Saxena
All types of recessions, on average, not just those associated with financial and political crises (as in Cerra and Saxena, AER 2008), lead to permanent output losses. These findings have far-reaching conceptual and policy implications. A new paradigm of the business cycle needs to account for shifts in trend output and the puzzling inconsistency of output dynamics with other cyclical components of production. The ‘output gap’ can be ill-conceived, poorly measured, and inconsistent over time. Persistent losses require more buffers and crisis-avoidance policies, affecting tradeoffs in prudential, macroeconomic, and reserve management policies. The frequency and depth of crises are key determinants of long-term growth and drive a new stylized model of economic development.