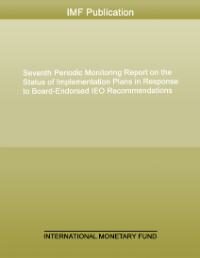 Seventh Periodic Monitoring Report on the Status of Implementation Plans in Response to Board-Endorsed IEO Recommendations
International Monetary Fund
The Seventh PMR includes: (i) a discussion of progress made over the last year on the actions corresponding to four Management Implementation Plans (MIPs) that were classified as still “in progress” in the previous PMR; and (ii) an assessment of the progress made in achieving the high-level objectives in three areas directly related to those MIPs. In addition, an update on substantive issues related to five older MIPs agreed since 2007 is provided at the end of the report. Three new evaluations have been completed by the IEO since March 2014. In July and August 2015, Management issued the MIPs in response to these evaluations. Given that only a short time has passed since their completion, progress in addressing the actions contemplated in those MIPs will be discussed in the next PMR. 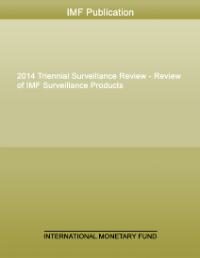 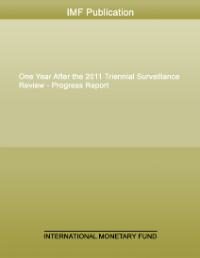 One Year After the 2011 Triennial Surveillance Review - Progress Report
International Monetary Fund
This progress report provides a short update on the first year of implementation of the 2011 Triennial Surveillance Review (TSR) in line with the Managing Director’s Statement on Strengthening Surveillance of October 2011. The report does not provide a comprehensive review of surveillance—which will be done in the 2014 TSR. Instead, its purpose is to establish, at an early stage, whether the new operational priorities are being implemented, set out key areas of progress, and discuss the challenges raised in their implementation. The report also identifies areas where further efforts may need to be directed—particularly following the change to the legal framework—to ensure even implementation and delivery of effective surveillance. The report recognizes that, while some measures have been implemented over the past year, others will take more time to come to fruition.