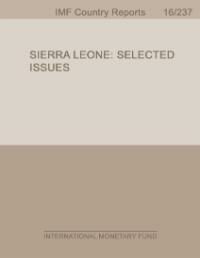 Sierra Leone: Sierra Leone: Selected Issues
International Monetary Fund. African Dept.
This Selected Issues paper aims to measure the impact of the Ebola virus disease (EVD) epidemic on economic growth in Sierra Leone. A novel empirical approach is used, which is based on a Difference in Differences setup, called the Synthetic Control Method. The model suggests that EVD had a severe impact on growth. In 2014, the first year EVD hit the country, the impact on real growth excluding iron ore is estimated to be more than 5 percentage points. It is suggested that in outer years, the severity of the impact will lessen, and growth will converge to its normal path by 2018.