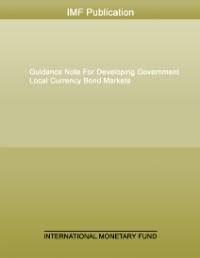 Guidance Note For Developing Government Local Currency Bond Markets
International Monetary Fund and World Bank
This guidance note was prepared by International Monetary Fund (IMF) and World Bank Group staff under a project undertaken with the support of grants from the Financial Sector Reform and Strengthening Initiative, (FIRST).The aim of the project was to deliver a report that provides emerging market and developing economies with guidance and a roadmap in developing their local currency bond markets (LCBMs). This note will also inform technical assistance missions in advising authorities on the formulation of policies to deepen LCBMs. 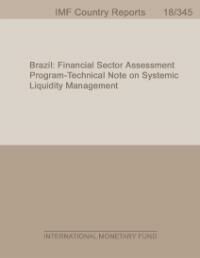 Brazil: Financial Sector Assessment Program-Technical Note on Systemic Liquidity Management
International Monetary Fund. Monetary and Capital Markets Department
Brazil’s financial markets are generally liquid and sophisticated. Brazil is blessed with a wide array of instruments which investors can use to manage and hedge interest rate and FX risks. The infrastructure supporting markets appears sound and is widely attributed by market participants to ensuring the resiliency of Brazil’s markets despite a multitude of significant shocks. A key foundation of the resiliency of Brazil’s markets is the large structural liquidity surplus (around 20 percent of GDP) and Brazil’s substantial FX reserves. Market participants generally have ample cash reserves that provide a key buffer against liquidity shocks. Brazilian investors have a strong preference for high quality short term liquid investments. Brazil’s history of economic instability drives investors towards short term liquid investments of the highest credit quality such as overnight repos and short-term government bonds. Dollarization is low reflecting restrictions on FX investments available within Brazil but hedges against FX risk are widely available and give investors’ confidence to hold Real. Government bonds are the centerpiece of the securities markets.

The global financial crisis and the ensuing Great Recession raised concerns about adjustment fatigue, deflation, currency wars, and secular stagnation that presented a sense of déjà vu: similar concerns had arisen at the time of the Great Depression and at the end of World War II. As with earlier crises, these concerns prompted calls for greater international policy cooperation—both to achieve a sustainable recovery from the crisis and to prevent future crises. This volume compiles papers from a 2015 symposium of eminent scholars convened by the IMF to discuss how history can inform current debates about the functioning and challenges of the international monetary system. An introductory chapter sets the stage for the other chapters in the volume by giving a broad overview of the performance of the international monetary system over the past century, highlighting the key events and challenges that shaped it. Subsequent sections look at historical antecedents of today’s challenges, describe how the modern international monetary system has been—and continues to be—shaped through international financial diplomacy, provide a present-day perspective, and examine the analytics of international policy coordination. 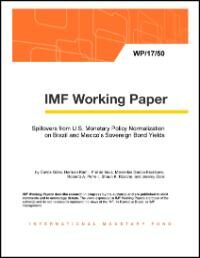 Spillovers from U.S. Monetary Policy Normalization on Brazil and Mexico’s Sovereign Bond Yields
Carlos Góes, Herman Kamil, Phil De Imus, Ms. Mercedes Garcia-Escribano, Mr. Roberto Perrelli, Mr. Shaun K. Roache, and Jeremy Zook
This paper examines the transmission of changes in the U.S. monetary policy to localcurrency sovereign bond yields of Brazil and Mexico. Using vector error-correction models, we find that the U.S. 10-year bond yield was a key driver of long-term yields in these countries, and that Brazilian yields were more sensitive to U.S. shocks than Mexican yields during 2010–13. Remarkably, the propagation of shocks from U.S. long-term yields was amplified by changes in the policy rate in Brazil, but not in Mexico. Our counterfactual analysis suggests that yields in both countries temporarily overshot the values predicted by the model in the aftermath of the Fed’s “tapering” announcement in May 2013. This study suggests that emerging markets will need to contend with potential spillovers from shifts in monetary policy expectations in the U.S., which often lead to higher government bond interest rates and bouts of volatility. 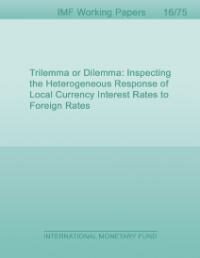 Trilemma or Dilemma: Inspecting the Heterogeneous Response of Local Currency Interest Rates to Foreign Rates
Mr. Luca A Ricci and Wei Shi
This paper studies the heterogeneous response across countries of local currency interest rates to foreign and domestic factors, thus contributing to the discussion on the policy trilemma in international economics. On average, floaters appear to be less affected by the U.S. in the short run (up to about one year). However, there is large cross-country heterogeneity in the response: floaters that care less about domestic objectives, exhibit stronger fear of floating, or show higher co-cyclicality with the U.S., respond more to foreign rates. This suggests that floating does not necessarily imply a lack of response of local policy rates to foreign ones, but seems to allow independence when needed. Moreover, the effect of foreign rates on the short end of the local interest rate curve seems to operate mainly via the foreign influence on local policy rates, thus suggesting that central banks may be themselves the source of conduit of the “global credit cycle” discussed by Rey (2014). At the same time, most countries face the equivalent of a “Greenspan conundrum” as their long term rates are mainly influenced by foreign factors.