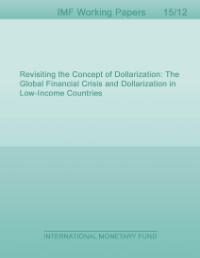 Revisiting the Concept of Dollarization: The Global Financial Crisis and Dollarization in Low-Income Countries
Miss Nkunde Mwase and Mr. Francis Y Kumah
The economic literature has examined deposit dollarization in nominal terms, typically focusing on the ratio of foreign currency deposits to broad money. However, while private agent demand for foreign currency may remain unchanged in foreign currency terms, there could be large fluctuations in the dollarization ratio simply due to exchange rate movements. This paper proposes a new approach to measuring dollarization that removes these exchange rate effects, and demonstrates that beyond the variance of inflation and depreciation, the level of inflation and size of depreciation also matter for dollarization. While dollarization in nominal terms surged during the recent global financial crisis, there was a downward trend in real terms. Employing a set of econometric estimators, this paper investigates whether “real” dollarization during 2006–09 was associated with the crisis, and the role of initial macroeconomic conditions, quality of institutions, risk aversion, and prudential measures. We find that exchange rate appreciation and reductions in sovereign risk do moderate dollarization; but the results for global volatility have low statistical significance, perhaps because global shocks tend to preserve, to a large extent, relative attractiveness of foreign assets. Nonetheless, estimated impulse-response functions point to a large but short-lived positive impact of global volatility on dollarization, which could reflect economic agents heightened concerns about spillover effects of global uncertainty on the domestic economy.

A payment system encompasses a set of instruments and means generally acceptable in making payments; the institutional and organizational framework governing such payments, including prudential regulation; and the operating procedures and communications network used to initiate and transmit payment information from payer to payee and to settle payments. This book, by Omotunde E.G. Johnson, with Richard K. Abrams, Jean-Marc Destresse, Tony Lybek, Nicholas Roberts, and Mark Swinburne, identifies main policy and strategic issues in payment system reform, describes the structure of payment systems in selected countries, highlights areas of consensus, and suggests the direction for future policy analysis.

In late 1979, the African Center for Monetary Studies requested, on behalf of the Association of African Central Banks (AACB), that the Fund staff prepare a study describing the existing payments, exchange control, and exchange rate arrangements in the proposed 17-nation Preferential Trade Area (PTA) of Eastern and Southern African States, analyzing any payments obstacles to trade in the region, and recommending improvements in payments arrangements that would promote intraregional trade. 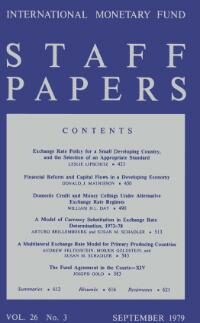 IMF Staff papers: Volume 26 No. 3
International Monetary Fund. Research Dept.
This paper examines two questions: What basket of currencies should a small developing country use as the exchange rate standard for its currency? When are discretionary changes of the value of its currency against the standard warranted? The exchange rate policy of a small, price-taking country cannot influence the terms-of-trade fluctuations imposed upon it by deviations from purchasing power parity (PPP) among trading partner countries. The paper introduces two types of calculations that are helpful in analysing the questions raised and employs Indian data to illustrate their use. While sustained differences in financial policies between a country and its trading partners, leading to different rates of inflation, might require a nominal exchange rate adjustment to restore a tenable real rate, structural changes in an economy will often require that the real exchange rate itself adjust toward a new equilibrium. By thus identifying the separate sources of real exchange rate variations, the paper sheds light on the question of whether a change in the exchange rate standard could reduce the variance of the real exchange rate. 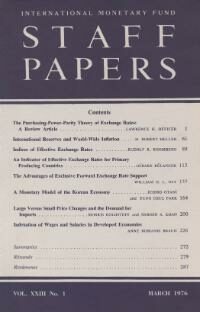 IMF Staff papers: Volume 23 No. 1
International Monetary Fund. Research Dept.
This chapter presents a review article on the purchasing power parity (PPP) theory of exchange rates. The PPP theory involves the ratio of two countries' price levels or price indices times a base period exchange rate as the most important variable determining the exchange rate, but it allows both for other explanatory variables and for random influences. Criticisms of PPP include the existence of tariffs and transport costs, the role of income in exchange rate determination, and the existence of noncurrent account items in the balance of payments. The direction of causality (prices to exchange rates) has also been called into question. Several kinds of tests of the PPP theory have appeared in the empirical literature. One test demonstrates that the ratio of PPP to the exchange rate is systematically related to differences in per capita income across countries. Other tests correlate time series of PPP and the exchange rate or perform a comparative-static comparison of the two variables over time.

Summary Proceedings of the Twentieth Annual Meeting of the Board of Governors, 1965
International Monetary Fund. Secretary's Department 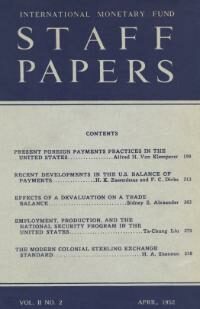 IMF Staff Papers: Volume 2, No. 2
International Monetary Fund. Research Dept.
This paper discusses various foreign payments practices in the United States. Most foreign payments in the United States are, therefore, done along traditional lines in whatever manner. Several nontraditional practices, however, have developed in recent years as the result of trade and payments restrictions established by foreign Governments. The amount and type of exchange sold by the US banks to their customers are limited only, if at all, by regulations abroad or by the banks' own limitations. In making or receiving foreign payments, the US banks deal generally with three types of customers which are, in the order of their importance: exporters and importers, individuals or corporations desiring to make or receive nontrade financial payments, and speculators. Foreign payments for account of individuals are usually small individually however, in the aggregate, they represent an important function of the banks located in the larger cities with a considerable foreign-born population.